iOS + Android
| Through The Ages

If you're the sort of person who likes their mobile gaming to be spoon fed to them through a shiny straw, then it's probably for the best that you stop reading this review right now. Through The Ages is not going to be for you.

It's a vast, labyrinthine game, and the tutorial is going to take you at least an hour to complete. Even when you've done that you're not going to understand everything the game has to offer.

Through The Ages is an experience that you're going to have to put weeks of your life into. But if you're willing to do it, you're going to find one of the most in-depth strategy games that the App Store has to offer.

The game is based on a board game. It's about leading a civilization from its birth to its technological zenith. That's not an overestimation either. You start with a tribe, you can end up in the stars.

But it's by no-means an easy feat. You need to create resources, build up your technological base, fight off other empires, and generally do everything that a real-life leader would do.

Oh, and you'll die as well. Your leaders can only survive for so long before they pass away, because that is how time works. So you need to get new leaders. And build wonders. And do so many ruddy things. 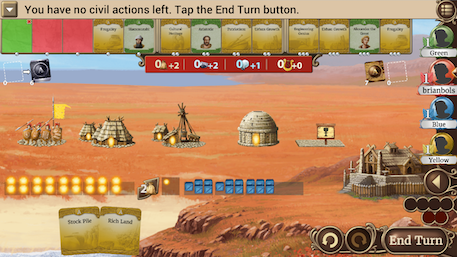 There's worker placement. There's a deck of cards. There are two different sets of action points. There are decisions you need to take almost every second of play. Do you expand your military? Do you build more wonders? What's going to happen when the next event gets played?

Through The Ages is a game of questions. And it's those questions you need to consider at almost every turn. You're not just thinking a few moves ahead, you're thinking hundreds of years into the future, while keeping an eye on what your opponents are doing.

This is a game that's going to be different every time you play it. Go online and you'll find players with vastly different styles. Learning to counter everything is going to take you a very long time.

But there's single player here too. You can take on a variety of challenges that the game sets you, or create your own sessions with different rules and AI players.

To be this good takes ages

There are a few niggles here and there. The translation isn't perfect, and sometimes the game leaves you to your own devices a little too early. Plus on a phone things can get really fiddly from time to time.

But on the flipside of that, this is an unashamedly massive game. It packs so much into your pocket that it almost seems obscene. And if it clicks with you, you're going to devour it.

No, it's not the sort of game to start your mobile board gaming career with. And even if you're au fait with the comings and going of the genre, there's still a lot of work to do to grasp everything Through The Ages has to offer.

But stick with it. Push your face deep into the folds of its flesh and you'll find that there's a truly epic experience just waiting to be pried out.

This isn't one for the faint of heart, but if you're looking for a board game to really get lost in, Through The Ages is going to be right up your street
Next Up :
Sumire review - "Why do some days stay in our thoughts forever?"