This War of Mine - Let it completely destroy you

iPad + Android
| This War of Mine 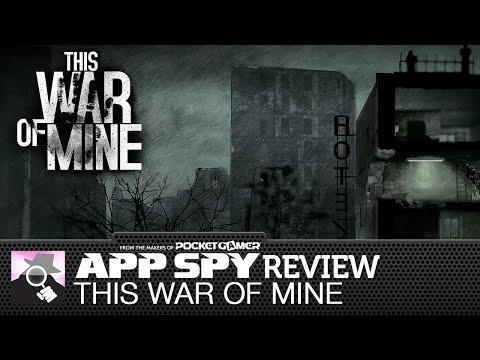 There are some moments in This War of Mine that are uniquely, unflinchingly difficult to play through. Moments that make you realise just how powerful and terrifying a medium videogames can be.

And they're not conjured with bombastic set pieces or gallons of pixels. They're tiny snatches of conversation drifting up to you from a basement, red circles suddenly moving towards you in the gloom.

For a moment you'll be paralysed with fear. Unsure what to do next. Trapped between an awful situation and an overwhelming desire to survive. So you do what most people would do. You run for the exit.

The game is set during a conflict in a fictional nation. You control three survivors trying to keep surviving. You begin in a wrecked house that's mainly filled with rubble and a few supplies. During the day you work and sleep and eat. During the night one of you has to scavenge.

It's when you're scavenging that the threat of the conflict becomes real. In your house you're bored and sad and hungry and scared. Outside you fear for your life at every turn. You need to find food and supplies, but there are other survivors, and they're rarely friendly.

In fact, some of the worst experiences you'll have stem from your night time excursions. The bombed out ruins of the city are unfriendly at best and harrowing at worst. There are not so much shades of grey as degrees of pitch black.

That the game manages to create such difficult situations with such a small set of mechanics is almost remarkable. The fear that grips you when you see someone moving towards you will stop your heart, and often you'll run away empty handed rather than risk confrontation.

This War of Mine is a horrible game of juggling life and death in one of the very worst situations imaginable. And it handles it delicately, carefully, and with the sort of understanding that many accuse videogames of being incapable of.

If you've not already played this brilliant, heart-wrenching game, then mobile is as good a place as any to let it completely destroy you.

This War of Mine - Let it completely destroy you

A harrowing and often tragic exploration of life in a war. This is a must buy
Next Up :
Nacon MG-X Pro Mobile Controller review - "A practically perfect mobile gaming controller"