The Witcher Battle Arena is a free-to-play MOBA for iOS, Android

Esteemed hack-and-slash RPG The Witcher is heading to iOS, Android, and various Windows gizmos as a MOBA spin-off, called The Witcher Battle Arena.

The free-to-play fighter will feature characters from The Witcher and The Witcher 2: Assassins of Kings, and will see these heroes duking it out on fantasy battlefields for glory, and for loot.

Up to six players can fight it out online, and the game features cross-platform multiplayer, too. Plus, there's an offline mode for when you find yourself without an internet connection.

Matches are short, with most lasting about five minutes or so. Your objective is to seize control of three pillars on the map, which causes the opposing team's life to drain away. Knock all 500 points off their meter and you win.

There's no farming or minions, but there's plenty of combat. The arena in which I played (which was redesigned from a location in The Witcher 2) was large enough to give you some breathing space when you spawn, but small enough to put you just a few steps away from being in combat.

You're almost always fighting, and that works better for portable gaming, in my book. 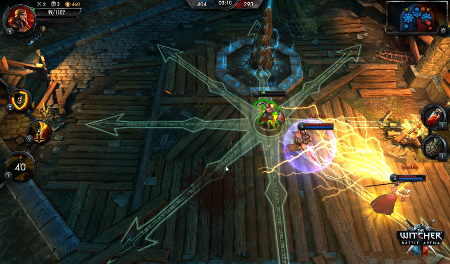 Your options in battle are plentiful. After picking a character to play as - from a ten hero roster that includes Saskia of Aedirn, The Operator, Philippa Eilhart, and Zoltan Chivay - you head for the battlefield.

Each character has their own play styles and skills, and each of these skills can be used in multiple ways. I had a power where I could rapidly grow a barbed thicket to ensnare and damage an enemy, but I could just as easily have used it to momentarily block off access to one of the pillars.

You can tinker with each character's base skills outside of battle, and customise how they play to better suit your needs. You might improve the rate at which their skills cool, at the expense of how powerful those skills are.

There are healing potions for a quick boost of health, and a bomb to stun enemies, and these can be used once per spawn. When you're not fighting, you're upgrading your weapons and other items in the match, and after a few minutes of play each character will be significantly more powerful than when they started.

The representatives showing me the game highlighted that grind was being "narrowed" for quicker, more mobile-friendly play.

I was also told that snowballing had been eliminated. This is where one character in a MOBA match becomes so powerful that it cannot be defeated by the opposing team, and usually sucks the fun right out of a game. 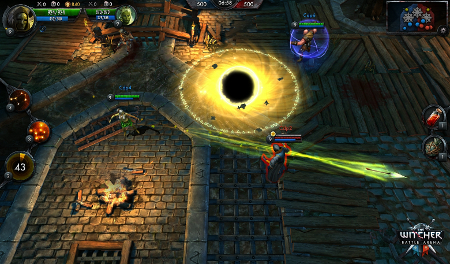 For the most part, I was really impressed. The multiplayer works as described, and each character seems different enough to the point that it forces you to play your role if your team is going to be a success.

The UI definitely needs work though. I constantly forgot to upgrade skills and items, because it wasn't made clear enough that I had the required experience to do such a thing. I also didn't feel that I was being provided enough feedback about what I was or wasn't doing right in battle.

The game's still some way out though, so there's plenty of time for Polish dev duo CD Projekt Red and Fuero Games to tweak the game's shortcomings. 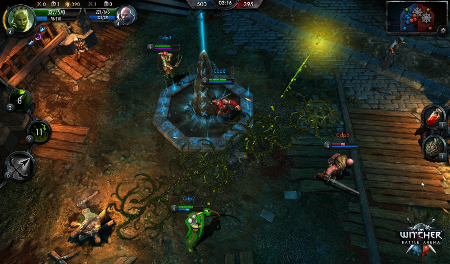 Ultimately, CD Projekt Red seems to understand just how high the stakes are for this game. It's a much-loved series, and going the free-to-play route for a mobile iteration will immediately raise a few eye brows from the PC and console elite that tend to play it.

Luckily, the free-to-play model doesn't use an energy system, doesn't use gems, and almost everything is unlockable without spending money.

You're awarded chests with random items inside as your loot, and will be able to simply play the game to access the majority of the content.

As for what's behind a League of Legends / DOTA 2-esque pay wall, it looks like some of the characters and a few vanity items will require you cough up some dough.

If the above doesn't sound like your mug of brew, then you'll be happy to know that this release will have no affect on the main series, and is its own separate entity that it's possible to ignore and not miss out on any vital bits of story in the overarching Witcher narrative.

That said, I don't think you'll want to do that, as The Witcher Battle Arena is already an exciting multiplayer battler, and there's loads of development time to polish its less refined elements. Expect it later this year, just ahead of the release of The Witcher 3: Wild Hunt.