If you've just started playing Crytek's latest action-packed game for mobile (and you probably should be), then you're probably looking for a handy little guide.

You know, one to make your progress through The Collectables that little bit easier.

You're in luck, then. That's because I have put together precisely that for you here.

So, yes, you can expect a few hundred words of advice for new players, tips for combat, and a few words of warning. Scroll down for all that gaming goodness.

How the game works 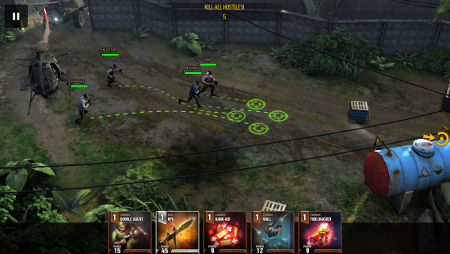 Think of The Collectables not as a squad-based action game with tactics and cover and heavy weapons, but as a kind of dungeon-crawler in a lush jungle.

As soon as you begin seeing the game in this way, you'll realise that you'll need to call upon different gaming skills to progress successfully and quickly.

Considering the make-up of your squad; running and re-running the same stages for loot; improving the stats of your characters; and making your way through tricky situations through brute force by over-levelling characters are the keys to your success here.

You start at one area of each run, and have to get to the end with at least one party member alive.

Sometimes, you'll need to escort a VIP or destroy 'X' number of buildings. Generally, though, it's a case of entering a stage and then exiting with as little resistance as possible.

Don't fret about tactical nuance. For the most part, in fact, ignore cover altogether. Just plough through each stage like a particularly beefy tank and you'll usually be fine. 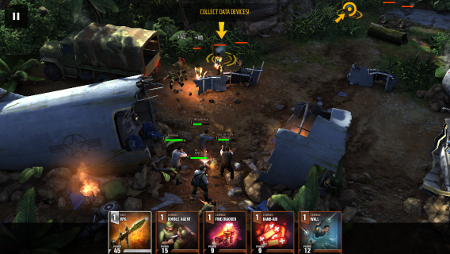 No matter how good you are at picking the perfect strategy in more tactical games, you should treat your troopers here like a single unit with multiple weapons and health bars.

Your individual heroes aren't very powerful by themselves, and are picked off easily when alone. Together, though, they're a mighty unit capable of killing off dozens of enemies.

Separating up your troops not only makes them vulnerable, but it also draws you away from what you should be doing. The tap, hold, and drag movement system for independent units is fiddly and time consuming, and distracts you from the real job, i.e. storming through a stage as one.

When you enter an area, look for potential cover spots and park your whole team behind them, popping the leading character behind the chest-high wall for an added defence bonus if you so desire.

But don't do so by sacrificing the number of squad members that are firing their weapons at enemy positions, as more guns blasting away at baddies will bring them down faster. 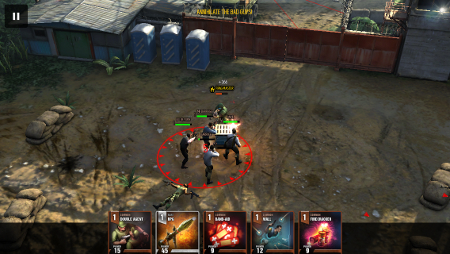 You're not really penalised for moving and shooting, so feel free to wander about the battleground and explore. The only exceptions to the above rules, at least early on in the game, come in the form of Standoffs and Fragmasters.

Standoffs are battles with heavily armoured adversaries that will not go down without a prolonged fight or a swift strike from a rocket launcher. Don't leave your troops in the open when facing these opponents or they'll be decimated.

In the case of Fragmasters, they'll chuck grenades at you with a large area of effect, so you'll need to keep moving to avoid the blast. It takes a little while to kill these chaps. Apart from their grenades, though, they're harmless. 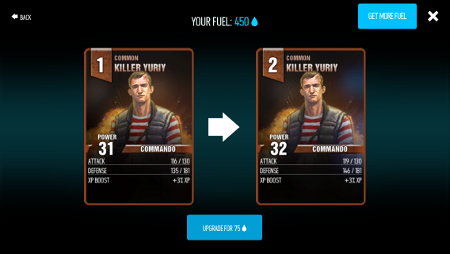 You can easily fall into some bad habits while playing that can seriously stall your progress.

Don't forget that you need to build up and curate your team when not in war zones. You should be spending your Fuel on increasing your best party member's abilities and swapping out the weaker characters for tougher ones.

You can help yourself along this path by scouring the various landscapes for XP crates. Whenever you repeat stages - and you will need to repeat stages - you'll find that these bonus XP boxes are in the same place each time. Tap them to grab them and give yourself an experience boost.

Finally, don't forget that you have Action Cards at your disposal, and that these are not one-time use items. Familiarise yourself with the ins and outs of the cards and when you should be using them, since you will begin to need them as the action hots up.