Well, nor did we until our sister site PocketGamer.biz interviewed Nyamyam about Tengami's 3-year development process.

"This initial concept for the game was a fast-paced platformer with a very acrobatic ninja, and you would create pop-up platforms for the character to progress," Nyamyam's Jennifer Schneidereit said. "It was basically a 2D platformer."

"I don't even know why we did that now," Nyamyam co-founder Phil Tossell added.

"Maybe it was because Jennifer had made action games before [prior to Rare, Jennifer Schneidereit worked at Acquire, best known for the Tenchu, Way of the Samurai, and Shinobido series]. So we were like 'let's make a ninja game, that will be cool.'" 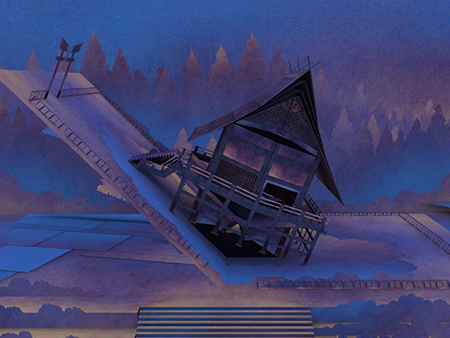 You can read the rest of the Tengami making-of over on PocketGamer.biz, during which Nyamyam reveals that Android and Vita versions of Tengami are possibly in the works.

As always, we'll let you know more about these ports as soon as we hear anything about them.

Good on paper: The making of Tengami