It's been a week of highs and lows for Temple Run 2 developer Imangi.

Okay, so, it's mostly been highs. Dizzying highs, in fact.

You see, according to Imangi co-founder Keith Shepherd, Temple Run 2 has already racked up a whopping 20 million downloads on the App Store.

To no one's great surprise, then, Imangi's Bronze Award-winning endless-runner has raced to the #1 spot in the Free App chart on Apple's App Store.

So, what could possibly take the shine off such a monumental achievement?

Well, it seems scammers have been trying to cash in on Temple Run 2's iOS success by publishing copycat apps on Google Play.

Flagged up by Shepherd himself via Twitter, one of these fake apps bore the real game's official logo, screenshots, and the name 'Temple Run 2 HD'. 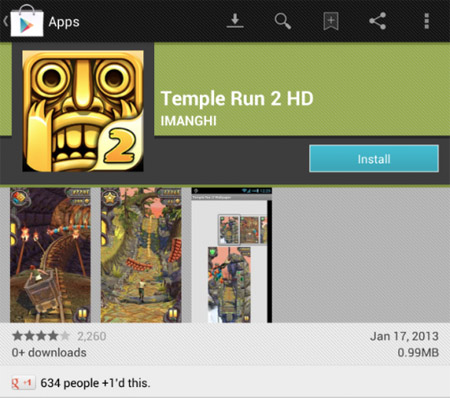 The thing that should have sent alarm bells ringing in this instance was the listed developer (pictured above). We're guessing the 'H' is silent.

Google has since pulled the offending app - and others like it - from Google Play, something a grateful Shepherd quickly acknowledged on Twitter.

According to Android Community, the official Android release of Temple Run 2 is pencilled in for Thursday.

Our advice, therefore, is to avoid any Google Play app bearing the Temple Run 2 name between now and then.

Oh, and always check the name of the developer before you download. A quick look can save you a lot of heartache... and malware.