On your mark... get set... go! You can now play as Usain Bolt in Imangi's Bronze Award-winning Temple Run 2

In addition to being a six-time Olympic champion and a good friend of Richard Branson, Usain Bolt is an adventurous treasure hunter.

Bet you didn't know that, eh?!

So, yeah, you can 'buy' the current 100m and 200m world record holder for 69p / 99c and take him on a run through Imangi's crumbling corridors and mine cart-filled tunnels.

Speaking to our business-focused sister site PocketGamer.biz, Bolt revealed that his appearance in Temple Run 2 is unlikely to be his last in the mobile gaming world.

According to the Caribbean sprint sensation, he'll release his own endless-runner at some point "in the future". 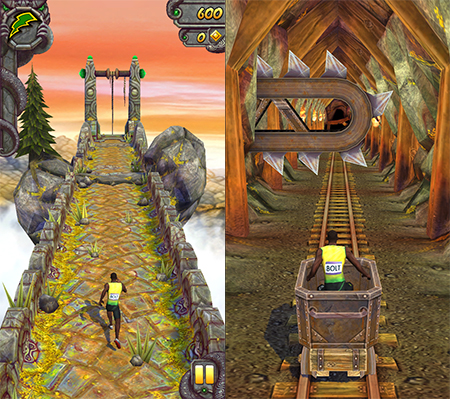 Unless the game is only playable in 10- or 20-second-bursts, however, the game's dev isn't really going to capture the essence of being the man himself.