'We're actually getting back to the core interaction - that playful, fun stuff'

If you've been holding back on buying a PS Vita and waiting for that elusive must-have game, you might want to pay attention to Media Molecule's Tearaway.

Developed by the maker of the phenomenal LittleBigPlanet, Tearaway is a title of breathtaking originality, which is all set to get the most out of Sony's more-than-capable handheld console.

We had the chance to visit the Guildford-based studio last week and sat down with the game's lead designer, Rex Crowle, to find out more about the game that could yet save the PS Vita. 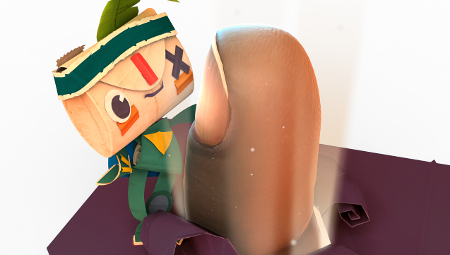 Pocket Gamer: Releasing Tearaway as a PS Vita exclusive seems like a fairly risky thing to do right now. How do you feel about that? Do you think it's the sort of must-have game that will make people view the Vita as a must-have device?

We're going all in making this adventure so that everyone's got another good reason to buy a Vita. So, yeah, I hope a lot of people will enjoy it.

The papery character design and game world of Tearaway are brilliantly surreal in every sense. Where did you get your inspiration in the first instance, and how has it evolved over time?

Yeah, definitely, [they are brilliantly surreal]. I mean the paper was there right from a very early point - following on from just wanting to make a very tactile world.

The paperiness just came from having artwork all over the walls and all over the floor [of the office], and everywhere. Although the concepts that I was drawing at the beginning were rejected, I just liked the way that as they built up, they were starting to look more interesting, and they started to peel.

I started to think that would make an interesting environment to actually run through or to shake about in a more dramatic way. So, that's kind of how it all kicked off. 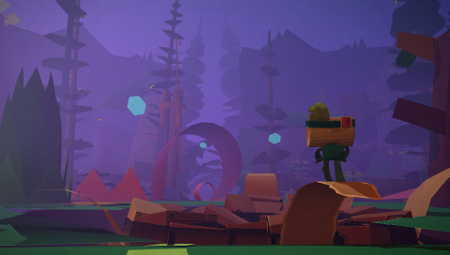 Did you always envisage Tearaway as a handheld game? Needing that tactile nature?

Yeah, totally. I wanted to make it a very personal connection between the player and the game world.

With Tearaway, we're returning to the original focus of creative gaming at Media Molecule.

Now, LBP was all about level creation. With Tearaway, we're trying to flex some slightly different muscles and try to create more of an adventure, more of a set-up world.

But, we're then encouraging creativity to the point where you almost treat the game as a starting point, and then you continue that creativity outside of the game.

How does that manifest itself in terms of rewards?

The rewards that we're working on - as you unlock various challenges and stuff - are little papercraft printouts with which you can start playing.

Instead of just unlocking trophies that only a certain amount of your friends will ever know about, you'll be unlocking and then owning cool versions of little printed-out Wendigos and what have you - all building up around you. 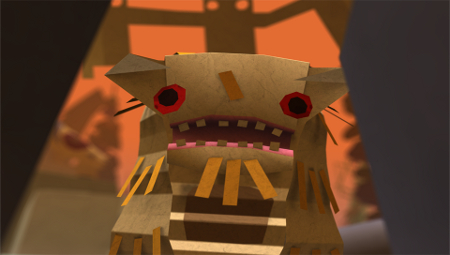 Is it possible to make stuff from the game yourself with papercraft?

Yeah, there are customisation options.

One of the reasons the world is made of untextured sugar paper / construction paper is so that people can then bring in their own photos and start retexturing bits of the world.

And make it their own...

You've obviously had to create a lot of bespoke technology from scratch. How much of a technical headache has that been?

It has been quite an adventure. It was definitely hard at the start, because it's not very clear actually how you edit a world made that way. It's not like you can just use Popit from LBP. That wouldn't have worked.

We couldn't really get into the mindset of working in any kind of grid or blocks, so it was quite a hard challenge. Particularly as we moved from the prototyping stage into working on the engine.

We had a prototype in an isometric style, and it conveyed some of the gameplay stuff, but it wasn't really allowing us to explore what paper can do.

As soon as we said, "Right, let's just start the world with a piece of paper. We'll make a fold in it, and fold it in half, and just keep going, and glue more bits of paper onto it... and hope no one sneezes. It'll gradually get bigger, and it eventually will gel together," we knew we were in business.

Is there a co-operative mode in Tearaway?

Well, everything is co-op, because Iota is there inside the game, and you're there outside of the game helping them.

But, no, not [in the traditional sense] with other players. No, there's no wi-fi play. 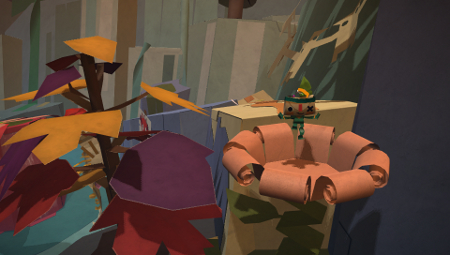 Tell us about your role at Media Molecule.

I've been at Media Molecule from the beginning, so that's seven years. We were all together at Lionhead prior to that.

On the LBP games, I was responsible for the anarchic visual style and atmosphere of the games. On Tearaway, I'm the game lead. I'm really enjoying the opportunity to get involved in all areas.

Does that make you the visionary on Tearaway?

As a team, we took a little step back to remind ourselves why games are fun in the first place and why we got into this business.

We're actually getting back to the core interaction - that playful, fun stuff.

How long has Tearaway been in the works as an idea?

A couple of years, really. For a long time, it was just four of us trying out ideas. We had all kinds of prototypes. We were trying out things where we just had the fingertips of characters in the early versions.

That was kind of fun for a while, but it really felt that we needed to balance that with some twitch gameplay. We wanted to have a stick-controlled character with buttons, yet really make the most of the Vita's traditional control schemes, and add this layer of mad real-world interaction through the back touch and front touch sensors and everything.

Media Molecule looks like a fun place to work.

Probably for us, but not for the cleaners!

Tearaway is heading exclusively to the PS Vita in Q2 2013.
Next Up :
Top Ten Commanders in The Lord of the Rings: Rise to War

Unfolding story: The making of Tearaway