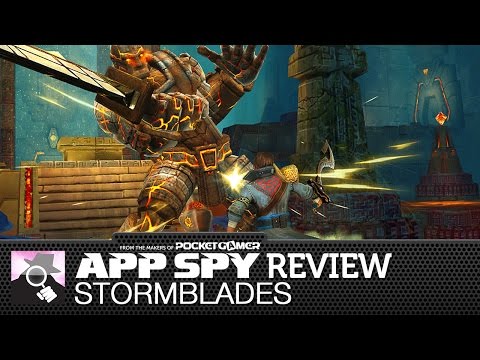 Stormblades is, to all intents and purposes, a more casual Infinity Blade. You're swinging swords, hacking up giant monsters, and generally having a lovely old time.

Its violence is slightly different, and it throws enough creatures at you that things stay fresh for a good long while.

Inevitably there's a slightly annoying free to play system, and nothing looks quite as impressive as the first time you sliced up an ogre all those years ago, but there's a spark here that makes it pretty compulsive.

The game follows the same patterns as its inspiration. You're an adventurer jogging through lush looking levels, pausing occasionally when huge warriors lumber into your path.

There's no blocking here, though - you need to parry attacks with swipes and dodge charged super moves with a double tap. Then, when your opponent is stunned, you swipe frantically to deal some damage.

And that's about it. There's less of a focus on gearing up here. You've got a sword, and you can make it stronger by spending some of the cash you earn as you hack through the game.

You can smash pots of gold to get some more cash, and there's a scoring system based on how well you've performed throughout the level.

Stormblades certainly looks the part, but anyone looking for something with a bit of depth is probably best off avoiding it.

After an hour or so of swiping things to death, the sheen does come off a little. And when you hit one of the grind or pay gates, you'll probably put it aside and play something else.

But the hour you'll spend will be a pleasant one, chock full of violence and the occasional whoop. And since you didn't pay anything for it, you can't really complain all that much.

A neat hacky slasher, it's pretty shallow, but there's a decent amount of fun to be sucked from its marrow
Next Up :
Star Discord review - "Needs polish, but it's shaping up to be a true RTS on the go"