A wise lobster once suggested that it's better down where it's wetter, alluding to the fact that life underneath the ocean waves is a far more enticing prospect than the drudgery of existing on dry land.

Perhaps if the lobster had seen the state of the sea recently he would have reconsidered. Squids Wild West takes a revisionist look at a grim frontier, besieged by an inky peril and peppered with endearing characters and some quite good jokes.

And the sea horse you rode in on

The game picks up where the original Squids on iPhone left off, with a group of valiant cephalopods out to save the underwater world from the forces of evil. The action is split into a number of different replayable levels that, when played in sequence, tell a story of ink, head-butting, and betrayal.

You start the game with eight different squid, spread between four different roles. Shooters can fire out bubbles at enemies, Troopers are your damage-sucking tanks, Scouts are nippy little blighters, and Healers, well, heal.

The combat is turn-based, with movement and simple attacks controlled by dragging back on your squid and then firing it out in the direction you want to go. Healers dish out health points by bumping into their allies, and there are bonuses for ricochets and skill shots.

Spiky obstacles, explosive barrels, difficult to navigate currents, and bottomless trenches all force you to think tactically about your next move - especially when leaving one of your squids isolated usually leads to them being killed.

For a few pearls more

You can spend the pearls dropped by the creatures you kill on levelling up, buying new hats (which strengthen your stats), and equipment for your army of tentacled one-line spewers. You'll need to, as well, because things get tough pretty quickly.

The best part of the first Squids game was the way it sculpted its experience around the hardware, and its sequel does exactly the same. This is a tactical RPG designed to be enjoyed in small doses. It uses the limitations of its controls to its advantage, and doesn't ask you to get too deeply involved.

In the end, Squids Wild West is more of the same, but that's a very good thing. It turns out that weird singing lobster might have been on to something. 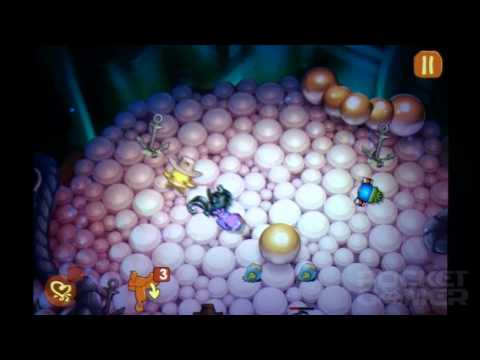 Every bit as enjoyable as its predecessor, Squids Wild West is a cleverly designed tactical RPG that anyone can play
Next Up :
Star Discord review - "Needs polish, but it's shaping up to be a true RTS on the go"