Here's what we know about Sonic Runners for iOS and Android

Sega has released a short teaser trailer for its upcoming mobile game Sonic Runners, and it shows precisely zero seconds of footage of the new game.

You'll get more information from the game's official site which reveals that the game's coming to iOS and Android in February in Japan, and that it will be a free to play game with optional purchases.

We also get this image, which might hint at the art style used in the game: 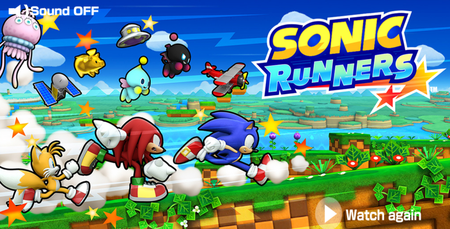 Meanwhile, an interview with Famitsu (translated by Sega Bits) reveals that the game is an auto-runner, that Tails and Knuckles will be playable characters, and that there will be boss fights against Eggman.

The most notable thing about the game is that it's the first made-for mobile Sonic game to be developed by Sonic Team itself. Games like Sonic Dash and Sonic Jump were developed by UK-based Hardlight.

We'll let you know when we hear more about the game.

Sonic Runners - Hints and tips to get you up to speed

Sonic Runners - good but maybe not what you wanted

Sonic Runners looks like classic Sonic, out now on iOS and Android [Update]