Sega has announced a new mobile game called Sonic Jump, but has revealed nothing more than a logo and the vague promise that the game is coming "soon".

Oh Sega, you big tease, you.

If that name is familiar, that's because Sega previously released a game called Sonic Jump on old fashioned mobile phones a few years back.

It was a Doodle Jump-style game, where the world's favourite spiny mammal would bounce from platform to platform in stages like Green Hill Zone and Blue Sky Zone. It had boss fights against Robotnik, and graphics borrowed from the Game Boy Advance games. 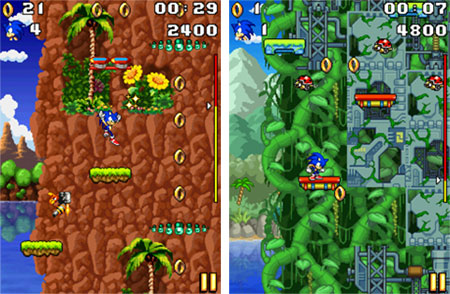 We reviewed it back in 2007, and said, "Sonic Jump is an interesting idea, and it's nice to see publishers trying new things on mobile rather than just rehashing retro games. But unfortunately, in this case, the risk doesn't quite come off."

Sega calls this recently revealed game a "new" Sonic Jump game so we'd imagine it will feature similar gameplay to the 2007 version, but it won't be a straight port. As for platforms, Pocket Gamer can confirm that it will hit iOS, and Android seems like a solid bet too.

One more thing: we'll be going hands on with the game next week. Come back then for the scoop.