Following on from the well-received kart racer Sonic & Sega All-Stars Racing, this adaptable sequel sees the blue blur leaping into the cockpit of a bevvy of shape-shifting vehicles.

In addition to series stalwarts Sonic, Tails, Knuckles, and Dr. Eggman (Robotnik, whatever...), players will have a selection of 22 classic Sega characters with which to race. 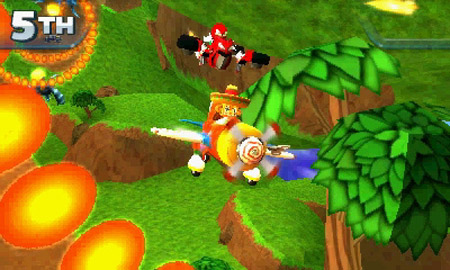 If you're the vain type, Sonic & All-Stars Racing Transformed will also let you use your Mii as a driver. I guess the term 'All-Stars' is broader than we thought.

Furthermore, social-types will be pleased to hear that Sonic & All-Stars Racing Transformed supports mutliplayer between you and up to seven other players. According to the Sega blog, these modes can be enjoyed via multi cart or single cart play.

As for the courses, you'll find yourself zooming across 20 terrain-shifting tracks based around popular Sega franchises. Cough up for the Limited Edition version, and you'll get the Outrun Bay track, too.

Next Up :
Princess Farmer combines match-3 puzzles with an engaging narrative, out now on iOS and Android