Blink and you’ll miss him

Sonic (plus a few of his friends, a handful of rivals, and rea-world NASCAR driver Danica Patrick for some reason) is back for another turn around the track in Sonic & All-Stars Racing Transformed.

Pocket Gamer recently sat down to play the game, and to chat with Gareth Wilson - design director at Sumo Digital - about the new features in this sequel and how the 3DS version will compare with the Vita edition.

When you first get behind the wheel you might not discern much difference between this and 2010's Sonic & Sega All-Stars Racing.

The handling, for example, is pretty much the same. “Whenever we look at handling we always think of [the previous game] as our kind of DNA," Wilson explains. "So that’s what we’ve kept”.

But as soon as you soar past a pair of transformation gates you'll realise that things have changed. Vehicles magically morph - from car to boat, from boat to plane - meaning you can speed over water, or take to the air.

To achieve this, Sumo has had to employ a more robust physics engine. "Because we were having water, we had to do proper physics," says Wilson. "You couldn’t really do half physics with water because it would just be a wobbly road and it wouldn’t be right." 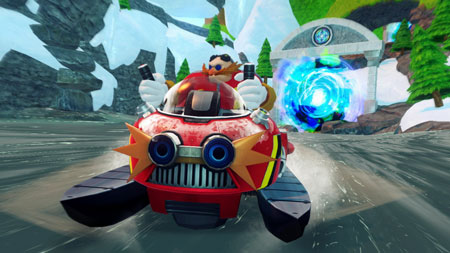 It's not just the vehicles that transform. The tracks also dynamically re-arrange themselves as you race around them. It's a smart step to keep the game fresh, as you never know what may be coming around the next bend.

The Adders Lair track, inspired by Mega Drive skeleton-basher Golden Axe, is a perfect showcase for the new transforming vehicles and tracks. “It’s a big race around an erupting volcano," says Wilson, "so you start off in the boat in the lava, change into the plane, and then drive around [in the car].

"So first time round it’s a road and it’s fairly safe. Then there’s an eruption, which means that all these bits of lava start coming onto the track and you have to dodge it. On the final lap the whole thing has blown up, basically, and you have to fly over the bit that you had to drive around.”

All of the tracks are based around classic Sega games such as Super Monkey Ball, Jet Set Radio, Panzer Dragoon, and House of the Dead, to name just a few. 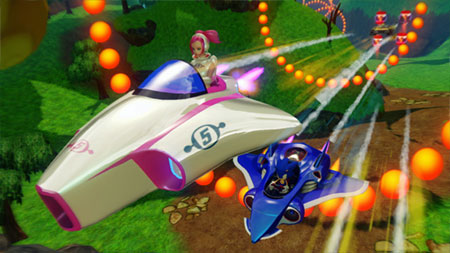 There's one more transformation to consider: the one from PS Vita to 3DS. Because, while the Vita version will be much the same as its console counterparts, the 3DS version is a very different beast.

On Nintendo's handheld, the game uses a different engine, "more optimised for that sort of platform," explains Wilson. That means that some of the more complicated modes - like the frantic Traffic Attack - will be missing on 3DS.

It's not just about processor power, though. Sumo says it's adapting the game to suit the preferences of the different console owners.

“We got some children to come in and play [a level in which] you had to blow a tank up and dodge missiles and they didn’t really get that," says Wilson. "We also had a mode where you had to dodge between lots of traffic and they kept getting run over really badly."

The key modes like World Tour will be much the same, and online play is present on both handhelds, but the 3DS will get more straightforward game modes - "like ‘beat people’s laptimes’ or ‘beat this particular character'."

Sonic & All-Stars Racing Transformed is shaping up to be a worthy successor to Sega All-Stars Racing, with plenty of dynamic vehicles and tracks and new modes to make it feel fresh. The game's out on 3DS and Vita on November 16th, in Europe. An iOS version will be along in 2013.

Screenshots are from the Xbox 360, PS3, and Wii U version of Sonic & All-Stars Racing Transformed.
Next Up :
Heroes of Crown: What to expect from Woobest Game's 3D idle RPG