There have been numerous other tweaks too

One of Apple Arcade's sports titles, Sociable Soccer, received a new update over Christmas that introduced a host of new features to the game. This ranges from tweaks to the UI to more substantial on the pitch additions that will hopefully improve the gameplay experience.

Firstly, in version 2.3.9 goalkeepers now have new moves with improved animations and AI. This will hopefully mean that you can rely on them to make saves they wouldn't previously alongside simply making the game look slicker with these new animations.

Elsewhere, the AI will also now create a wider variety of goalscoring opportunities than before. This should greatly improve the singleplayer experience by making the AI-controlled opponents feel less robotic and closer to facing another person.

The controls have also been altered to make it easier to both chip and sprint. So if you've previously been playing Sociable Soccer with a controller it might be worth checking out the touch screen controls again to see if this improves the feel of the game drastically. 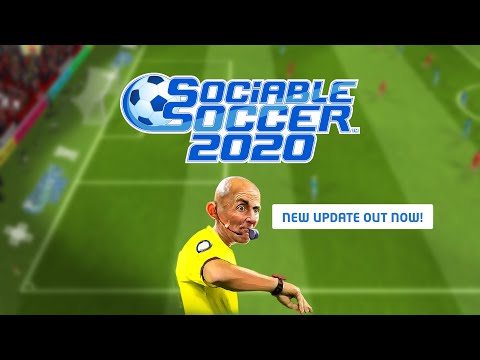 The referees will also apparently now make more accurate calls than before, which should lead to less frustration overall. There has also been a series of tweaks to the Club Clash menus alongside improvements to the rendering of graphics in-game. Check out the trailer above to see some of these updates in action.

Looking for more sports titles to play on your phone? Here are 25 of the best available for iPhone and iPad
Next Up :
Fernanfloo Party is a casual game that's available now for iOS and Android, created in collaboration with the popular YouTuber