You know those bits in console shooters where you need to stand next to a big ol' immovable machine gun and kill everything that moves? Well, Minion Shooter: Smash Anarchy is basically that.

Except rather than blasting waves of ghoulish monsters or foreign soldiers, here you're taking down vaguely adorable monsters.

And those monsters are trying to eat the world's last surviving coffee plant. Because of reasons I think. Anyway, please stop them, I'm powered by coffee and disappointment.

The gun you're using fires out fruit. Hit a monster a few times and it'll explode in a shower of coins. Those coins let you upgrade your weapons and hire bugs to go out and do some more damage for you.

You can't just fire all the time though, because your gun will overheat. You unlock different ammo as you go along, and you can upgrade it as well. While you've always got cherries to fire, you other fruits will run out, and you'll need to wait a while for them to reload.

Power-ups fly over, and shooting them will give your gun some extra oomph. There are environmental weapons as well that send twisters flying around or make your gun fire out blasts of ice. 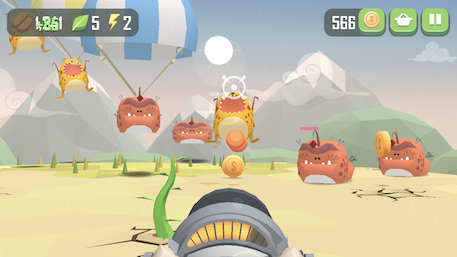 And that's about it really. The shooting ranges from the sedate to the frantic, and you can't help but grin when you manage to finish a level.

It's not the most challenging game, but the controls are slick, and the boss battles shake things up a bit. There are also asteroids that make everything really pixellated for a while. More reasons for that I expect.

After a while the whole thing gets a bit repetitive, like most of these simplified games do, but the free to play isn't too sticky, and there aren't any awful pay walls.

In the end, this is a nice looking distraction. It's easy to pick up and play, there's always something to shoot, and you're going to enjoy engaging in the slaughter.

Is it shallow? Absolutely. Is that a bad thing? Well it depends what you're looking for. Sometimes you want Shakespeare, other times you want The Beano. And this is definitely the latter.

Minion Shooter: Smash Anarchy isn't the most in-depth shooter you'll ever play, but it is quite a lot of fun
Next Up :
Honor 50 review - "Great for social media fans, and a strong show from Honor"