Your iOS or Android Game of the Week - Sling It!

This week's votes have been counted (and recounted), and we have a winner: Sling It!. 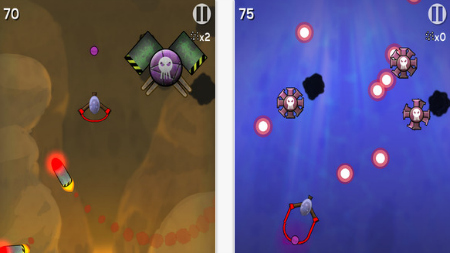 Sling It! is the colourful follow-up to YoYo Games's Pollushot, which nabbed an impressive Pocket Gamer Silver Award back in November of 2011.

For those of you who don't remember it, Pollushot is a physics-based shoot-em-up that features Angry Birds-style flick mechanics and Breakout-esque gameplay.

In the not too distant future, smoke-spewing Pollutnik robots have blotted out the sun and cast an eternal winter across your planet.

Naturally, you (and only you), can thwart their smog-filled campaign.

You do this with the help of you trusty sling-ship, which is equipped with a catapult that allows you to hurl devastating projectiles at your foes.

You can use the jagged pieces of metal that fly off your opponents as you attack them for extra ammo, and improve the power of your strikes by decking yourself out with abilities and power-ups.

Sling It! features a pretty nifty control scheme that allows you to move your slingshot around, arm it, and subsequently fire it all with a single sweaty digit.

Flick balls at robot pirates in Pollushot sequel Sling It!

Break it, catch it, Sling It!