iOS
| Skulls of the Shogun

Silver Award-winning turn-based strategy game Skulls of the Shogun has made its way from the sad deserts of Windows 8 and Windows Phone to the bustling metropolis of the App Store.

In this game, you lead a disgraced samurai through the levels of hell, slaughtering anyone who gets in your way and recruiting new units to your burgeoning undead army.

The first thing you'll likely notice about Skulls of the Shogun is its gorgeous cartoon graphics. The second? The wicked sense of humour running through the game.

Which is good, because otherwise it'd just be a grim story of skull-munching re-animated skeletons. 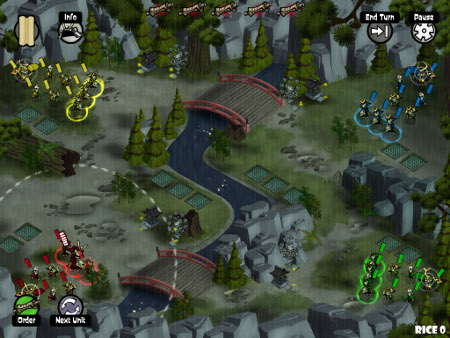 And if you sign up for a Skulls of the Shogun account, you can pick up your single-player game from the PC on your iPhone or iPad when you're out and about.

There's also pass-the-handset multiplayer, so you and three friends can try and murder one another in the same room on the same device.

We really liked the Windows 8 version of the game, calling it "tight, fast, and remarkably fun". We then added that "Skulls of the Shogun shakes the cobwebs off the turn-based strategy genre with some style".

Skulls of the Shogun