Making the leap from XNA to iOS

If there's one genre that translates well across console, PC and mobile, it's strategy.

Gone is any issue to do with controls - twitch reflexes and accurate inputs aren't a factor. Rather, the sedate pace of strategy games gels perfectly with touch controls.

Starting life on PC and console, Skulls of the Shogun made the transition first to Windows Phone and more recently iOS is yet further proof of the genre's suitability, though admittedly the three-strong 17-BIT team that originally started work on the game had some experience working for the big boys.

Both Borut Pfeifer and Ben Vance had worked for EA, while the third member of the team – lead artist, designer and project director Jake Kazdal – had previously been at Sega in Japan, where he'd worked on two of his "dream projects", Space Channel 5 and Rez.

But what challenges did Pfeifer, Vance and Kazdal's face bringing the game to a somewhat smaller screen?

The Art of War

17-BIT was itself formed by the three men when work began on Skulls of the Shogun.

"When the game originally got signed, I was able to bring on some more staff," Kazdal tells us.

"We got the immensely talented animator - and donut enthusiast - Callen Wagner, to do a ton of animation, and we brought on Colin Williamson, who had been at Square Enix in Tokyo for the last ten years, to start working UI and cinematics.

"We were also lucky to have a ton of amazing contractors, like Sam Bird, Dren MacDonald and DJ Makyo on the audio side." 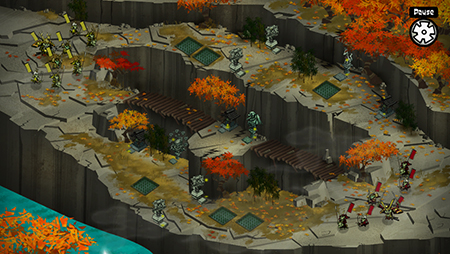 The game's vision for a samurai afterlife was underway, but the team's honour was about to be tested. The tools 17-BIT used were discontinued before the game was finished but, rather than committing seppuku, the team instead forged a new blade.

"Development was a little rocky as we started on XNA, which was killed halfway through development -may it rest in peace – and so we had to transition the project over to the Monogame framework," says Kazdal.

"Everything in the game is custom-built, from the level editor to the animation tools. If you take into account the time 17-BIT spent porting, Skulls of the Shogun was in development for over four years.

Living in Japan for five years has had a huge impact on Kazdal's art and design sensibilities. Looking at Skulls of the Shogun, regardless of its Eastern setting, you can see it seep into the game, especially in the bright, anime-like character design.

"While working at Sega in Tokyo, The Legend of Zelda: The Wind Waker was released," says Kazdal.

"I was so blown away by the look, I talked about it with my art director, who simply informed me that look was based on 1960s Toei anime, which I immediately bought as much of as possible and have become a hardcore collector of animation art from this era."

Kazdal's fascination with Japanese culture seeps into the artwork, through the script, even dripping out of the player's speaker and into their ear canal.

"While living in Tokyo I befriended an amazing artist, Dj Makyo, whose chillout dub live events became the highlight of my month," says Kazdal. "He quickly became one of my favourite musicians in the world, so when I had a choice when making the game, I immediately thought of him.

"Sam Bird, a musician I had worked with at EA on Command and Conquer, also contributed some stunning tracks. I wanted something ethereal, and afterlife-y, and am a huge fan of old dub, and samurai movies. Put in blender, frappe and voila."

The Japanese setting of the game mirrors Kazdal's design ethos, creating a synergy between product and creator.

"I love Samurai Warriors and the Asian Afterlife stuff is just ripe with adventures and crazy characters. I used to hike a lot in the Japanese countryside, and would always find these old abandoned houses, graveyards and castle ruins, and would wonder what kind of stories they could tell if walls could talk." 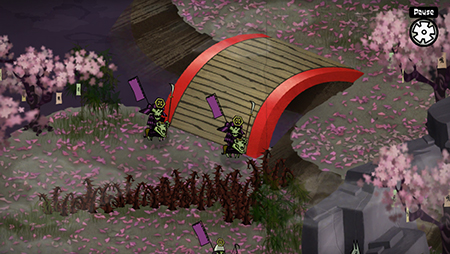 Unfortunately, walls aren't sentient and, as a result, we'll never hear the fascinating stories they would likely tell. The personalities in Skulls of the Shogun sure can talk, though.

One of the game's highlights is its writing, which remains consistently hilarious throughout.

The original script was written by Ben Vance, who served as the game's programmer and designer. Vance wrote a tongue-in-cheek draft, instead of the more serious vision 17-BIT had already planned, and it was slowly iterated on as the game was developed.

"Since the game was in development for so long, everyone involved kept throwing in jokes and massaging the script," says Kazdal. "And then we got a complete editing pass from localisation company, 8-4, where script doctors Mark MacDonald and Alan Averill just nailed it.

"We originally were going to have a much more stoic, serious script, but people responded so well to the goofy offbeat humor we had stubbed in we just decided to run with it. We wanted to entertain players, while reinforcing our stereotypes, and just rolled with it."

It's the humour that helps Skulls of the Shogun carve its own niche, making it stand out from other strategy games. It's not rare for a game to move away slightly from its original vision, either.

Judging by the reception, the tonal shift was a wise one indeed. Of course, it's not just the humour that makes Skulls stand out - the removal of the strategy-standard movement grid gives the game a loose, fresh feel.

"One thing we were always tired of was the constant ‘traffic jams' in other turn-based strategy games, which always seemed like such an annoyance," says Kazdal. "At one point, we were like, ‘Wait, what if we just got rid of the grid?' And the rest is history."

These weren't the only changes the game underwent, either. As well as a more light-hearted script and the removal of the movement grid, the controls took plenty of tweaking before 17-BIT found the 'sweet spot'.

"One major change was the control scheme - we'd gotten so much feedback on why it wasn't working, but couldn't quite figure out what was missing," admits Kazdal.

"It all came together at one of the PAX events, where everyone was just picking up the game and 'getting it' immediately. At that point, we figured we were finally okay.

"I'd say that the core design has been pretty solid the whole way through. If you'd go back to the very first versions, you'd see non-animated units just sliding around on a simple painted backdrop, but it's very much the same game. Of course, there's a lot of polish that goes on top of that, and so much balancing and tuning in regards to the numbers."

Skulls was planned to be as pure a strategy experience as possible, which is why 17-BIT went with just four standard units. Monk units were added into the mix to spice things up and add an extra layer of strategy to proceedings. 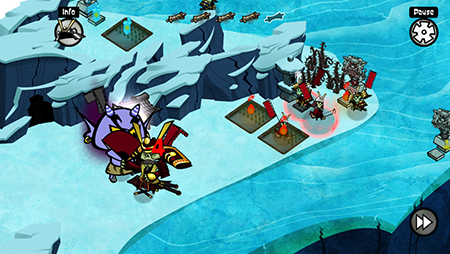 "The prototype was the Fox Monk, who started as just another human unit, but I thought he would be cooler as one of the white foxes from Japanese folklore," says Kazdal.

"Once he was in and working really well, we decided it would be great if all the monks were animals - it just fell into place. Then the relationships with their respective gods turned out cleanly into spell systems, and we were on our way."

As well as the Monks, there are other subtle systems in place to deepen the pure experience, such as the ability to knock units back - maybe even causing them to fall to their deaths - and the spirit wall mechanic, which allows the player to link units, preventing knockbacks or allowing an archer to fire without fear of reprisal.

The inspiration for these mechanics comes from an unlikely source.

"I was playing Virtua Fighter 4 one day, and realised why not bring physics into the game, I had been shooting for as much of a fighting game, arcade-feel as possible in a strategy game, and this worked perfectly," says Kazdal.

"The spirit wall was based on [the fact that] although we no longer had traffic jams from the grid-based system, now you couldn't block any more enemies either, so we had to find a solid solution to that new problem. We're very happy with the result."

As well as solving the problem of a gridless strategy game, 17-BIT also managed to solve another age old design problem - how do you engage the player in a tutorial?

"A lot of that comes from a very relaxed schedule and the ability to iterate hundreds of times - not to mention having hundreds of playtest sessions where we took copious notes," reveals Kazdal.

"We just kept refining the first few levels and were so deliberate in how we introduced every new gameplay concept and how it related to the story itself. We hope most people won't even realize that the first island is one big tutorial.

"There is nothing worse than a game that jams the entire tutorial down your throat before you get to start playing. Nothing."

Because the development time was so long, 17-BIT had time aplenty to polish the game and get the mechanics, tutorial and script feeling so tight. Many of the problems the team faced came from the tech side.

As mentioned, work started on the XNA framework, which was cancelled halfway through production. For the game to ship on all of 17-BIT's initial target platforms, a "considerable chunk" of the codebase had to be rewritten, "Which was no fun at all".

"The other challenge was in regards to cross-platform play - we are very proud of the fact that the Steam version can play Async multiplayer with iPhone and iPad," says Kazdal. "And if we do any future releases, you'd better bet that they'll be cross-compatible too." 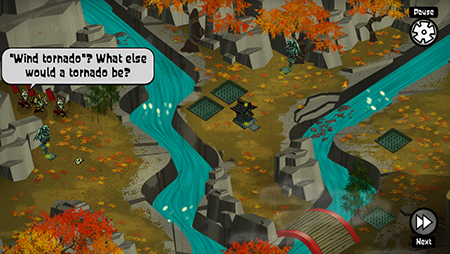 Porting the game to iOS was a relatively simple affair, however. 17-BIT already had Skulls running on ARM hardware with mobile GPUs. On top of this, the studio had also built in touch support, so it was just a case of refining the game to work well on Apple hardware.

"We had to tune up some of the graphics on the account that the Retina display is of ridiculous quality - there are so many pixels that it's like a 2K movie frame," says Kazdal. "The first time we saw it running on an iPad at native resolution it blew our minds."

Looking ahead, the future's looking bright for 17-BIT, and work has already begun on the studio's next title – currently planned for console and PC only - Galak-Z.

"Ben and Borut are still down in LA moving onto their own next adventures, and the Seattle team is on a dangerous mission to create the greatest 1980s anime spaceship arcade/adventure game ever, Galak-Z," says Kazdal.

"It will be coming to PlayStation platforms this fall, followed by the PC version. We were just named an honorable mention for Visual Design in the 2014 IGF."

While there are no plans for Galak-Z to take Skulls of the Shogun's path to mobile any time soon, it took Skulls a year to make it to iOS, proving 17-BIT is a studio that isn't afraid to spend time polishing its games. Polishing them until they're gleaming as bright as a crystal skull.

Skulls of the Shogun