Shogun is a turn-based strategy epic with the rapid-fire immediacy of an arcade game.

In our hands-on preview of Skulls of the Shotgun, we said it "never gets too bogged down in number crunching and unit positioning".

It's got a full 15-or-so hour story mode, with an off-beat spin on Japanese lore. You play as General Akamoto, a genius tactician who's just been stabbed in the back and subsequently washes up on the shores of the afterlife. 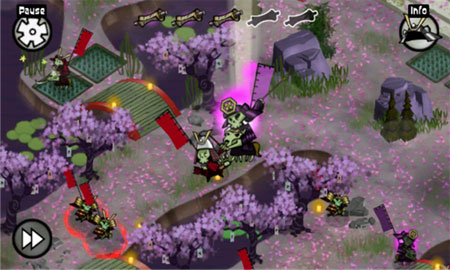 So, you'll quickly put together a ragtag army of the undead to fight through the four seasons (spring, summer, autumn, winter - not the hotel chain) and become the reigning champ of the hereafter.

On everything but Zune

But, Skulls of the Shogun's real claim to fame is its cross-platform compatibility with just about every device that Microsoft's making these days.

This means you can play the game on Xbox 360, Windows Phone, Microsoft Surface, and Windows 8 PCs. Plus, the game boasts a four-player asynchronous mode that works across all those devices.

And if you you buy it on multiple platforms, you can continue those multiplayer brawls - or your single-player progress in the campaign - on another device. Just save and restore your progress via Xbox Live.