What happens when you mix Ski Safari with US cartoon series Adventure Time?

I have no idea, in truth. But we're all going to find out pretty soon.

That's because Defiant Development has announced that an Adventure Time version of its Bronze Award-winning slope slider is in the works.

Publisher Cartoon Network collaborated with Defiant on a Ben 10 project last year. During development, the two firms realised that a mash-up of Ski Safari and Adventure Time could be a hit.

Rather than escaping an avalanche, then, Jake the human and Finn the dog will be skiing down a mountain in this upcoming game to escape the attentions of the evil Ice King. 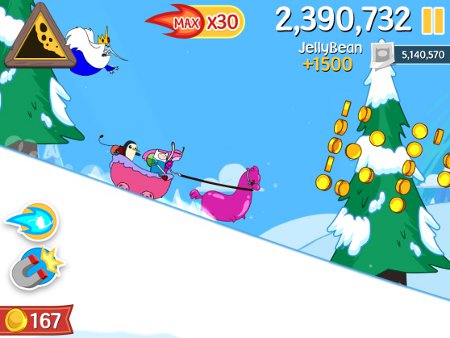 Jake will be able to pick up various creatures and characters from Cartoon Network's animated TV show to increase your score multiplier.

We're still a little light on details about a release date or price for this Defiant / Cartoon Network collabo, but we'll let you know more as soon as we hear anything solid.

VentureBeat
Next Up :
Among Gods RPG Adventure lets you collect more than a hundred heroes to fight the good fight, now open for pre-registration on Google Play

Ski Safari: Adventure Time is this month's free iOS game over on IGN

Cartoon tie-in Ski Safari: Adventure Time is out now for iPad and iPhone