Scurvy Scallywags surfaces on Android as a free-to-play puzzler

Android
| Scurvy Scallywags in The Voyage to Discover the Ul

The Silver Award-winning meta-match-three RPG Scurvy Scallywags has just made landfall on Android as a free-to-play game.

If you didn't play it on iOS, this is a wicked smart puzzler. Here, you live out the life of a pirate, while also doing chores to keep the Scurvy Scallywags broadway musical up and running.

At its heart, this is a match-three puzzler. But unlike in Candy Crush Saga, one of the tiles on the board is actually your swashbuckling hero.

By matching up gems, you shift chunks of shiny tiles, which lets your pirate protagonist move around the board. This enables you to do battle with rival pirates, run away from monsters, and pick up quest items.

We called Scurvy Scallywags a "fresh, interesting, and above all hugely entertaining match-three puzzler" on iOS. 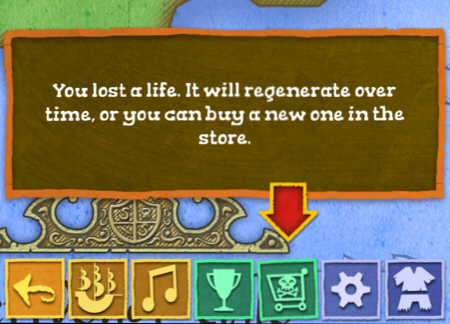 Unlike the iOS version, this Android edition is free to download. As such, some of the mechanics have been tweaked. The permadeath system has been replaced with an energy system, for example. And you can now pay to charge your skills.

But creator Ron Gilbert, of Monkey Island fame, assures us that the game hasn't been compromised by the shift to free-to-play.

"I still think F2P is destroying game design," he tells us. "The problem with a lot of F2P games is that they prey on players' addiction and habits and hook into that part of our brain that enjoys gambling."

So, how did Gilbert and long-time collaborator Clayton Kauzlaric keep their game on the 'straight and narrow' (ethically speaking)?

"The Android version had over 200 beta testers and we gave none of them access to IAP," Gilbert says. "It was important that they be able to enjoy the game without spending any money."

You be the judge. Scurvy Scallywags is free on Google Play right now.