The Scribblenauts series has always been about freedom – the freedom to solve puzzles in whatever way you see fit, or simply the freedom to roam the world in later games.

Scribblenauts Showdown offers up some freedom of choice, but only in very small packages, and it ultimately leads to a fairly shallow experience.

With a limited number of party games that you'll play repeatedly in the same sitting, to the incredibly small Sandbox offerings, you'll still have some fun, but you'll be begging for a more involved experience.

Where previous entries have focused on puzzle-solving, Scribblenauts Showdown is mostly focused on a collection of party games, some of which still require you to conjure up objects from thin air before you begin.

The dictionary of the game is incredibly vast, containing a wide variety of exotic birds, mythical creatures, and internet-speak for those so inclined – "kitteh" is an entirely valid option for spawning a cat, for example. 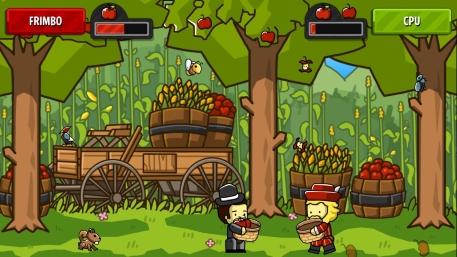 Accessing these objects can be a nuisance, however. The on-screen keyboard is presented in a radial menu, where you push the analogue stick towards a circle containing four letters and press the corresponding button on your Joy-Con to select that letter.

If it clicks, then you're away, rapidly throwing out words and filling the world with your creations. But some players will find it off-putting from the start, and if you're discouraged from using the game's central mechanic, it's not a good sign at all.

You'll only need to use the keyboard for the Wordy games, which task you with conjuring up a suitable object to use in the upcoming mini-game. Themes are randomised at the start of each round, which does a nice job of encouraging quick wits and being inventive with your lexicon to succeed.

The games themselves are fairly simple affiars – there's a Root Beer Tapper-style game in a diner, a Flappy Bird-style game, an Angry Birds-style game, and so on. They're all short and sweet, and can be a lot of fun to play, but they aren't the most original ideas.

This is also the case with Speedy games, which do away with the keyboard entirely and ask you to perform simple tasks like blowing up balloons, catching apples, or strumming a guitar at the right time. 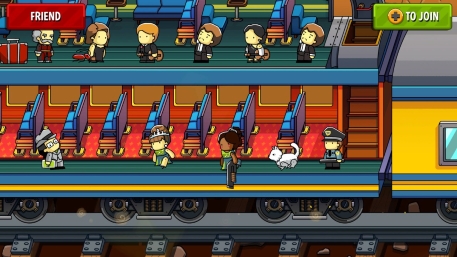 While fine in short bursts, you're going to encounter all of these games repeatedly in the same session. With 13 Wordy games and 15 Speedy games to pick from, it's surprising just how many times you'll see the same challenges come up, and within a couple of hours you'll have seen everything at least twice.

Showdown mode, the main meat of the game's party offering, does little to help this. Played out like a board game, you're given a hand of cards which help you move on the board, usually after playing a quick minigame.

This ends up being the most arduous way to play the game – you'll get multiples of the same minigames in your hand every time, so if you want to get anywhere, you'll probably need to do a dance-off at least twice in one game.

What could have redeemed Scribblenauts Showdown is its Sandbox mode, which harks back to previous entries in the series by giving you a small level to roam about, solve puzzles, and generally just have a lark in.

The problem is that there's just eight levels in the game, and the puzzles are either way too simple or incomprehensible without using the game's hint system.

You'll still be spawning in objects to solve problems, but there's no point in getting inventive – if someone has a football over their head, you make a football, and boom, mission complete. 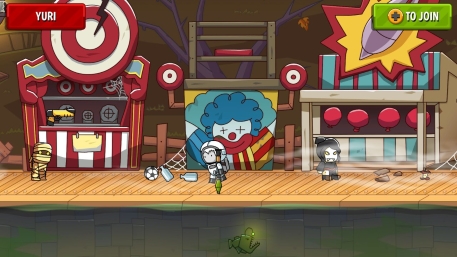 And then there's fetch quests, which completely ignore the game's core mechanic and asks you to roam the level searching for existing items to return to someone. It's never been a part of Scribblenauts before, and it feels completely out of place and at odds with the entire premise of the series.

You can breeze through the Sandbox levels in about an hour if you don't want to muck about, and your reward for doing so is the ability to purchase new items you'll never spawn, and buy outfits for your character, if that's your thing.

It's all a bit disappointing, really. Scribblenauts Showdown keeps hinting at great things – the minigames can be fun, and Sandbox mode could have been a thing of beauty.

But ultimately, it's all a little too stripped-back, with oft-repeated party games, not enough Sandbox levels, and not much opportunity to make use of the game's unique selling point of spawning random items.

It all works, and it is enjoyable in short bursts, but all-in-all, there's not much here that can be described as uniquely Scribblenauts, and that's a genuine shame.

It has the potential to be a great game, but Scribblenauts Showdown just doesn't have enough depth or freedom to live up to its name
Next Up :
Otaku's Adventure mobile review - "A truly bizarre love triangle"