Here at Pocket Gamer we love a bit of Sage Solitaire. And after the game's first major update, we love it even more. Even if we keep losing all our virtual money in Vegas mode.

Fortunately, developer Zach Gage and Vegas mode lead tester Chris Johnson are on hand to help you play to win. 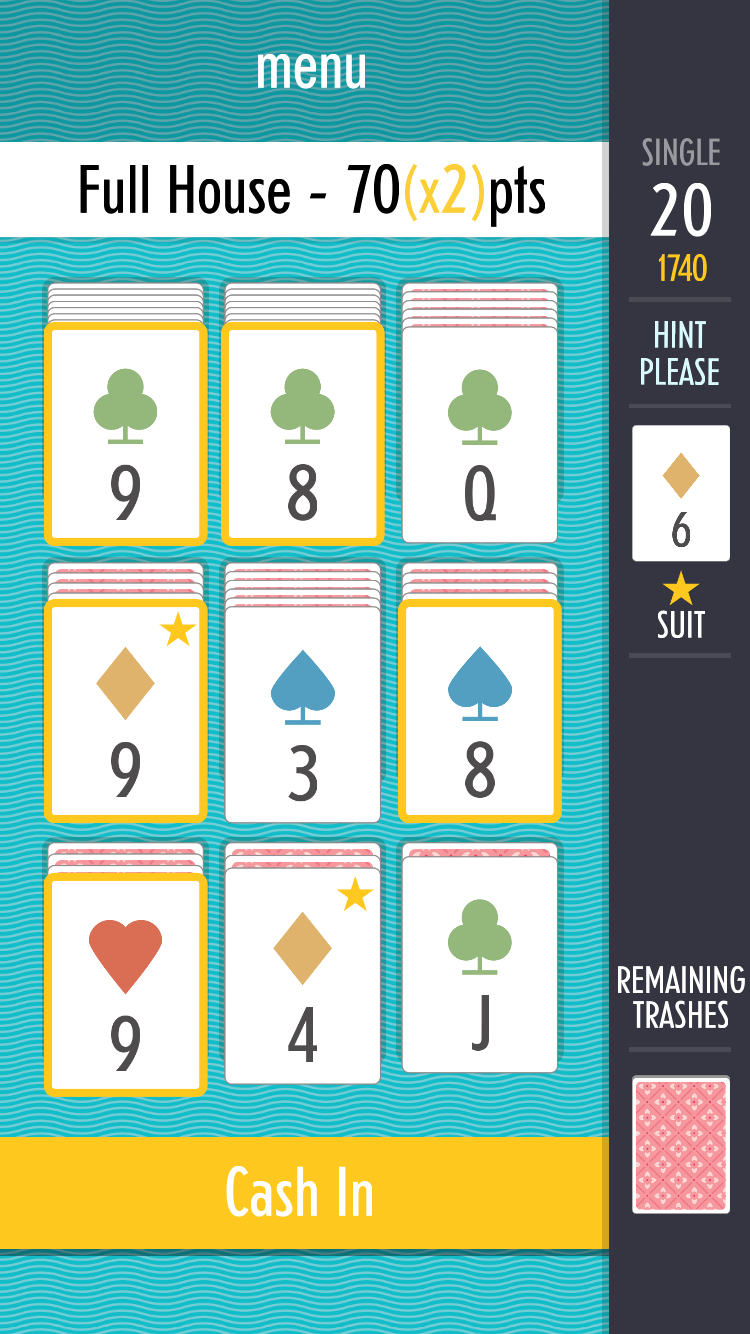 Zach notes that 'future memory' is admittedly a term he's made up, but the phenomenon it represents is important to playing Sage Solitaire well in any mode.

Every time you make a hand, you're more likely to be able to make the same type of hand in the future, he explains. So if you make a straight, it’s likely you’ll see more straights in the future.

This is why the straight and full house are so powerful. Making one of them leads to more, but also they break down into smaller hands - 3-card straight, three-of-a-kind, pair - that contribute to their generally showing up. 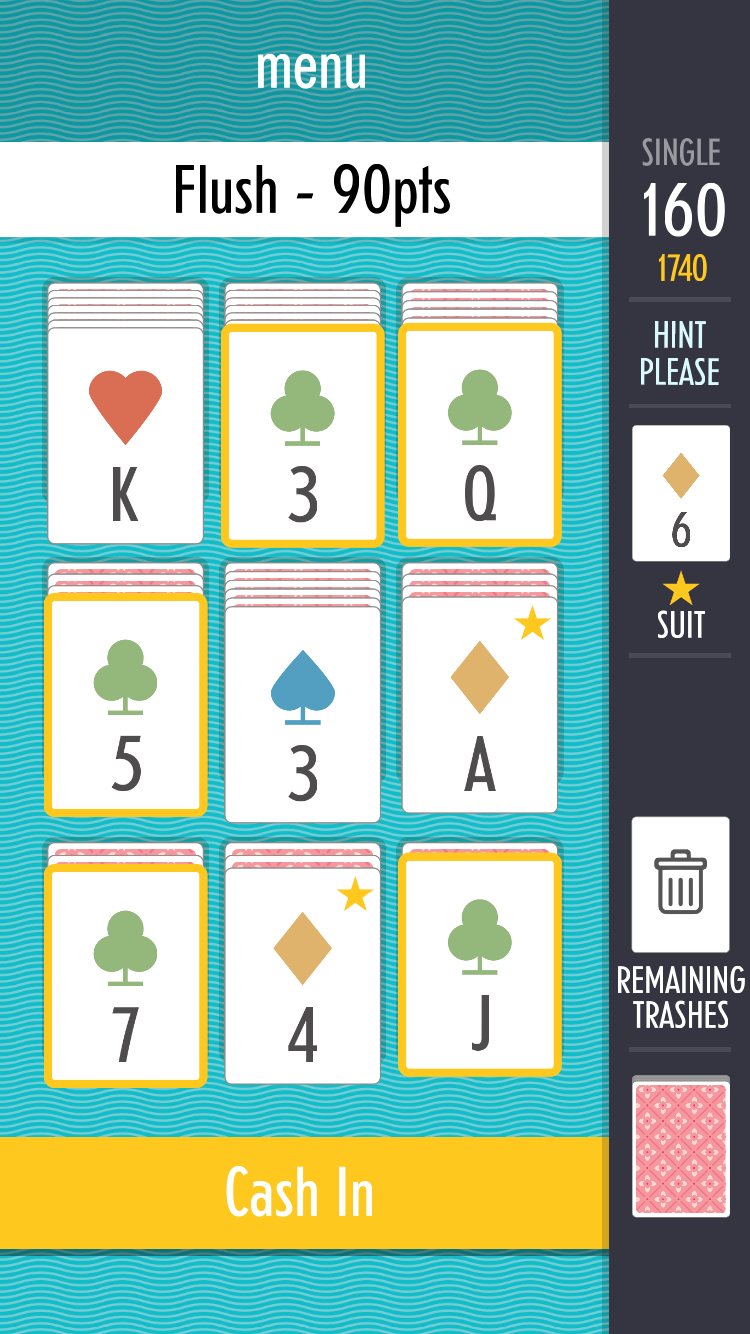 Tied to the previous tip, flushes are more dangerous specifically because they don't break down into a smaller hand. According to Zach, make too many early on and you may be left in a bind when you’ve fewer than five piles.

However, flushes that are close to being straight flushes are better than flushes that are haphazard. They won't give you more points, but they'll leave you with a more organised deck prone to giving you a straight or 3-card straight.

Focus on the top row 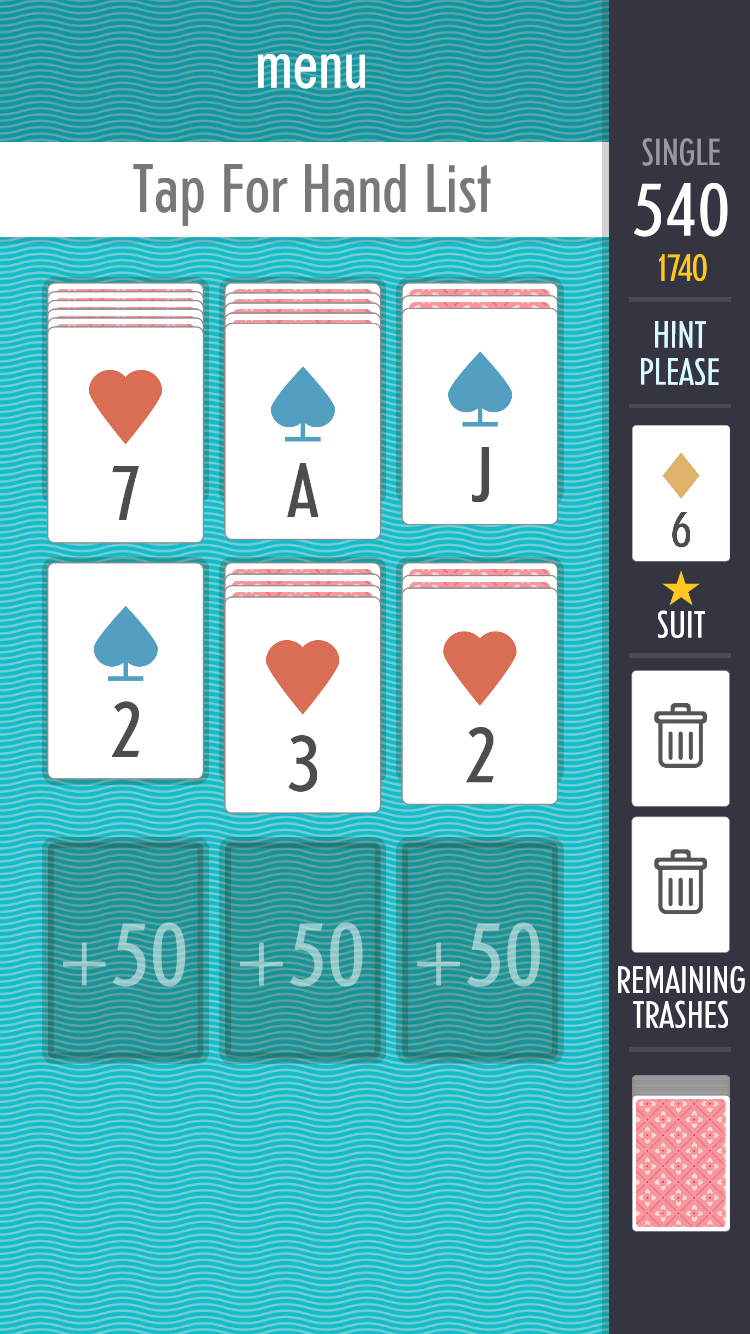 The top row has 24 cards in it, while the bottom two combined have 27. If you don't aggressively focus on the top row, you’ll probably run out of cards before you can clear the board.

Zach recommends thinking about hands in terms of the ratio of top cards to bottom cards.

If the ratio gets worse - for example, after using three bottom row cards in a full house - it's time to get more aggressive on the top row, possibly with trashes. (Although be wary of overusing trashes - they can burn up future hands.)

Multiple cards on a row can be fine 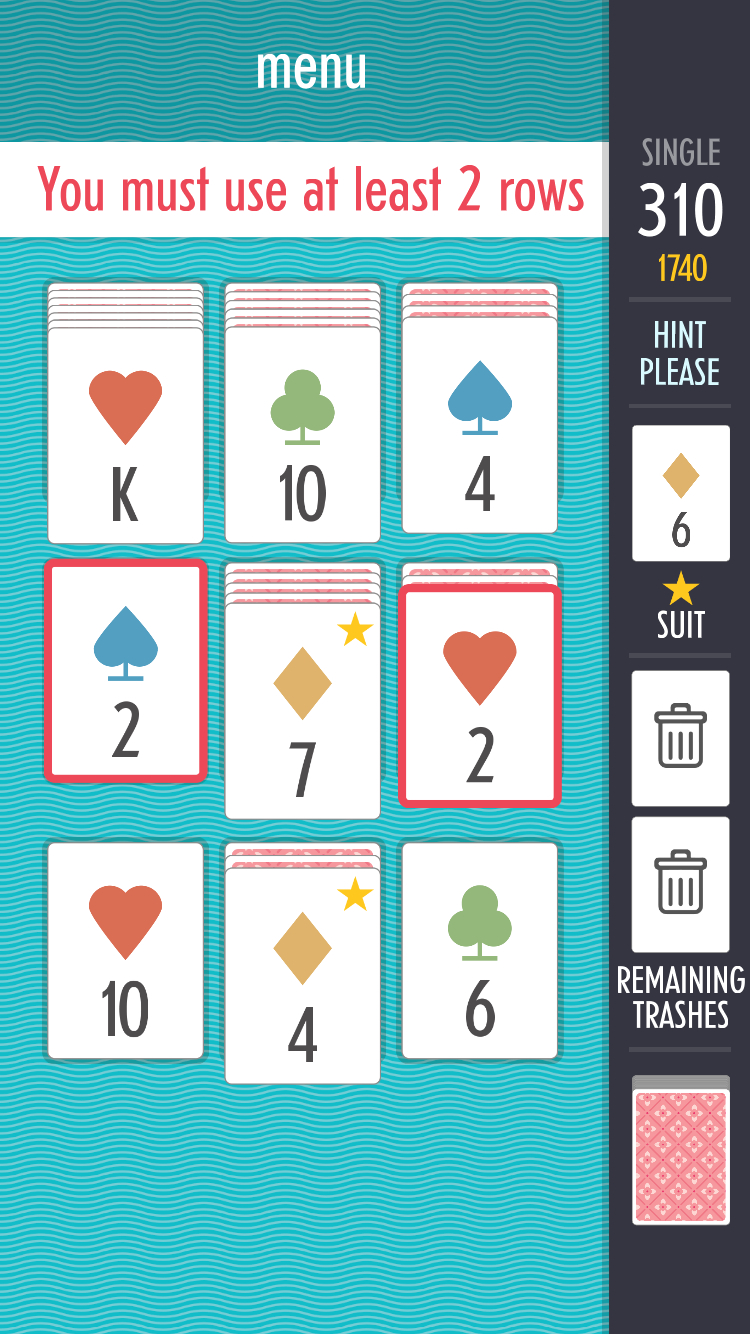 It’s frustrating when three cards show up on one row, but Zach argues this is a blessing in disguise, because you're just one pair away from a full house, or one card away from a four-of-a-kind. Try making hands around them or trashing cards to get lucky.

With two cards on a row, Zach recommends not trashing them, due to future memory. If they require breaking up, do so as part of a 3-card straight or a pair.

A possible exception - when they appear on tall stacks and your card ratio's low, trashing can be a good option. 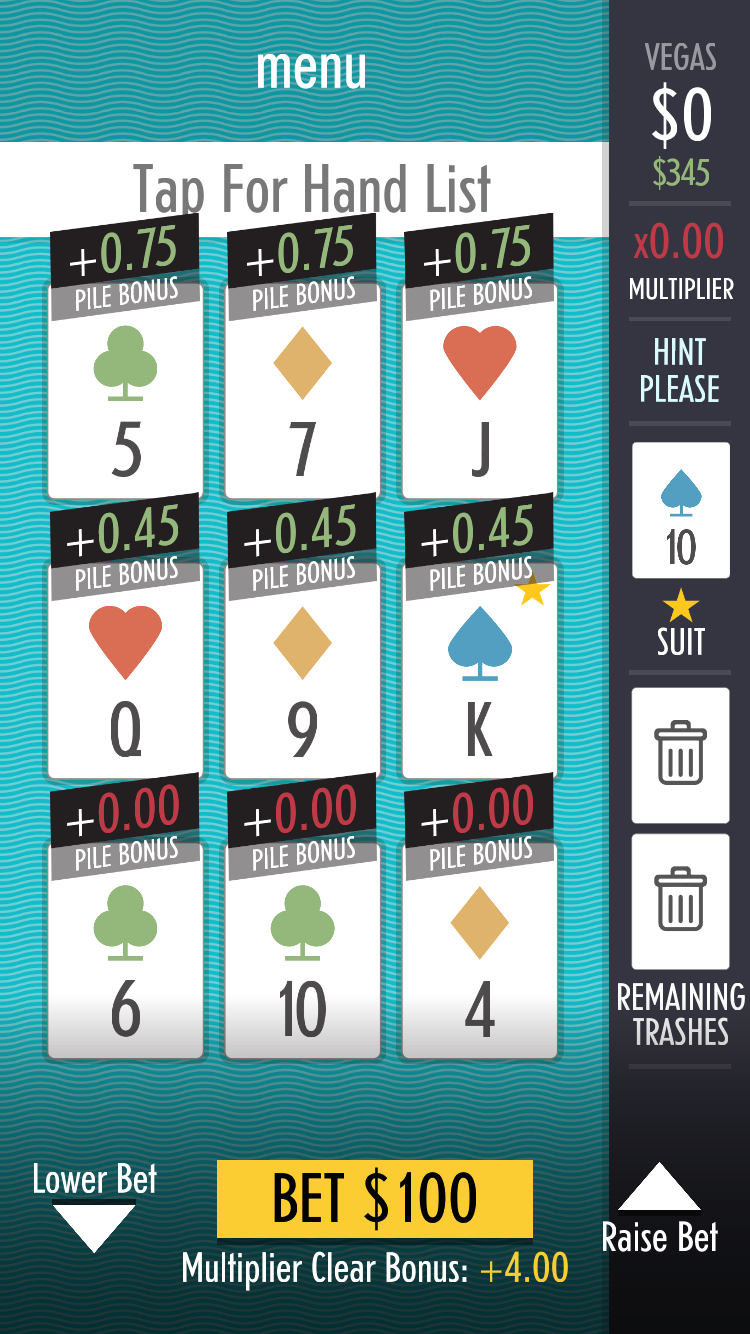 When you're immersed in Vegas, Zach says each bet level has its own strengths and weaknesses.

$50 bets are best for grinding out quick cash to mitigate losses, because it's the only bet level where you can make money without clearing the table. On the other hand, it is hard to make a ton of money using only $50 bets.

The trick is to limit losses as much as possible, so you're comfortable losing a hand or two, and then make it all back when you win.

$100 bets are the middle ground. You can manage losses more easily than with $200, but can't win quite as much 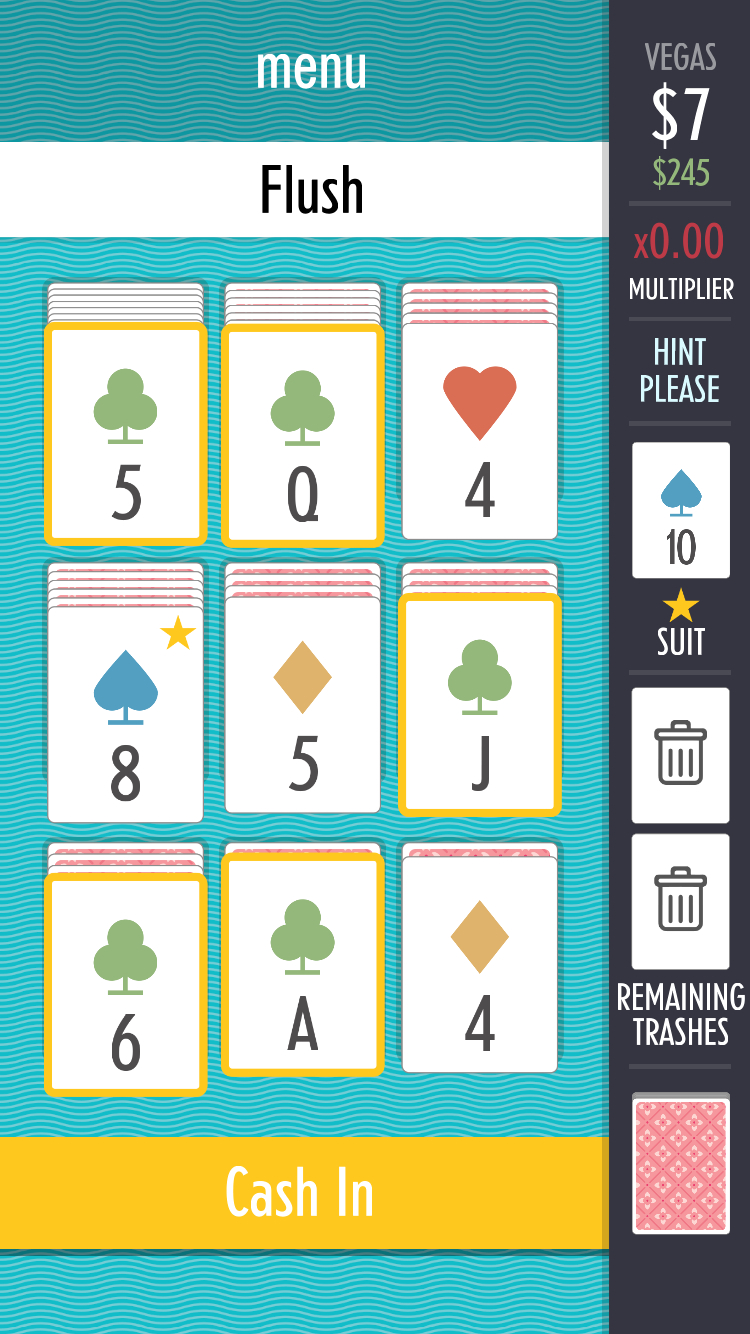 Experts of Single Deck Mode will consider flushes bad news, because they remove random cards from the deck but don't generate strong returns - they either don't use bonus cards or eat them all.

But in Vegas Mode, flushes can help you quickly clear lots of cards. Because only hands containing bonus cards score in Vegas, quickly removing loads of standard cards means you’re not losing anything.

Also, flushes are worth $10, which might not seem much, except… 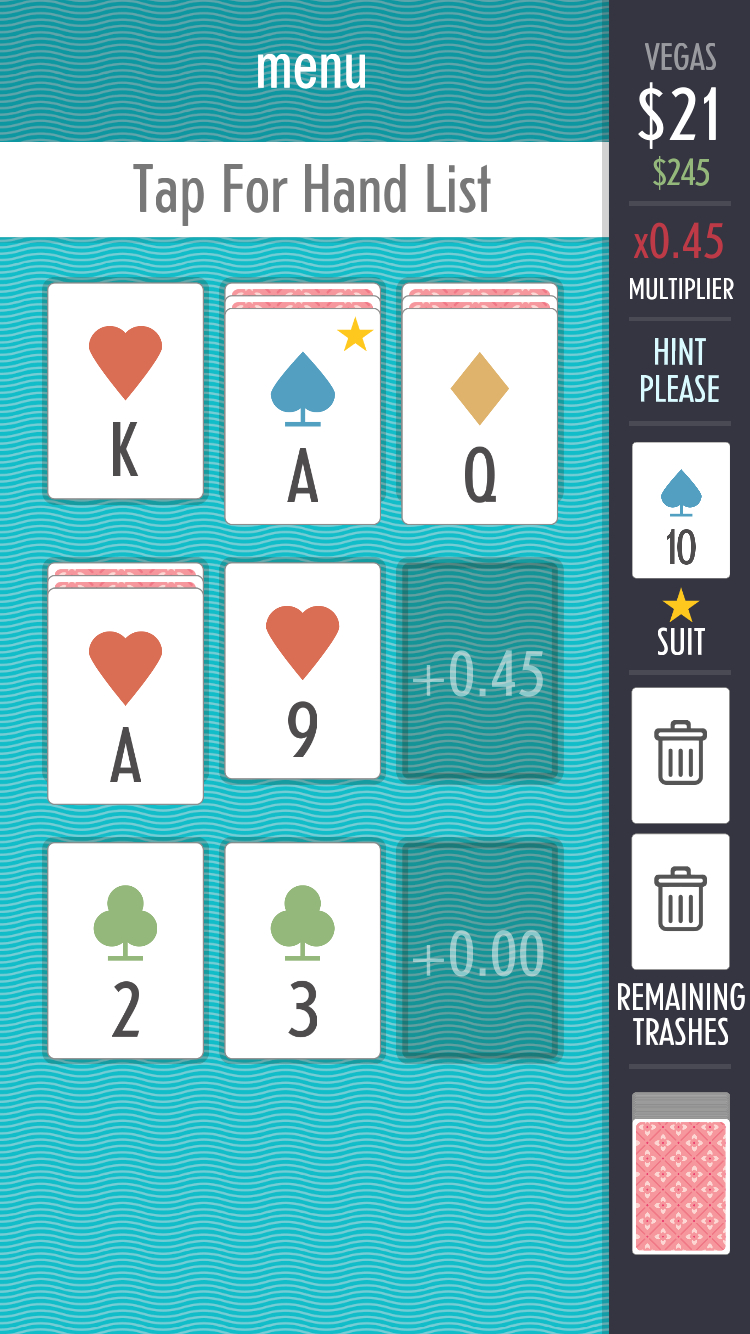 Don't go after any hand too hard

It's tempting to spend a game trying to get a four-of-a-kind, but Vegas Mode is about working with the deck, not against it.

If a hand isn’t coming up, take what you can and move on. If you spend too long on any given hand, especially with trashes, you're likely to wreck potential future hands.

Learn to feel when you’re on a streak

Zach says he knows hot-streaks are just a perception we lay on top of randomness, but this is more than that.

Sometimes our brains can do the magic optimisation Sage Solitaire asks for without us really understanding why. If you’re clearing game after game, update your bets and take advantage of being in the zone! 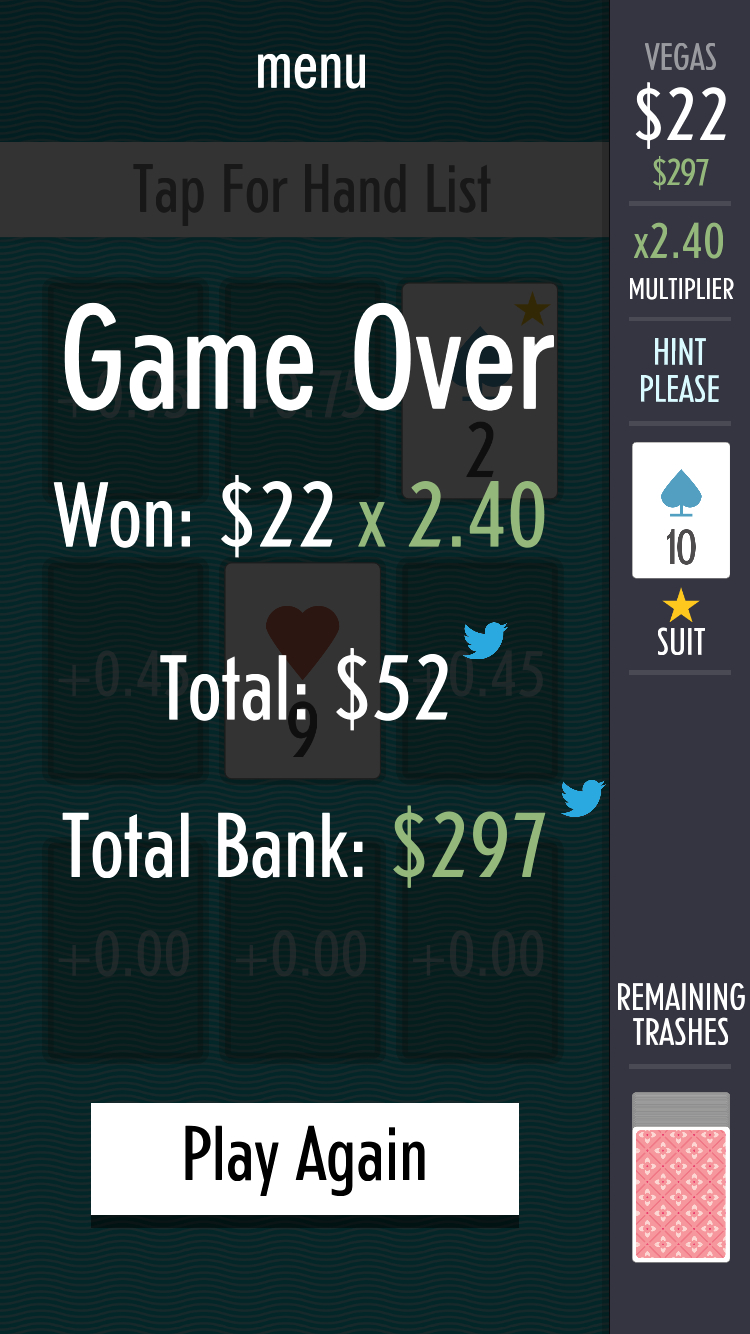 Lead tester Chris Johnson has a highest bank in Vegas Mode of a whopping $7,365, and so clearly knows a lot about the end game, when you've relatively few cards remaining. He says -

Hang on to all three rows for as long as possible, because this drastically improves your ability to achieve a clear and max out your multiplier.

Late in the game, you'll have gotten the bulk of scoring hands out of the way, so focus on clearing the board. Consider trashing after every hand. (Remember: every successful hand replenishes one trash.)

Be mindful of your multiplier

Do the maths. If you don't clear, will you make your bet back? If not, what will you lose? Sometimes, it's best to ignore unturned cards and focus on clearing the top and middle rows to improve your multiplier.

Know what’s in your deck

Think back to cards you've used and imagine what might remain. If necessary, make notes as you play. If you think you've a shot at clearing the board, take it.

If you're certain it'd be a miracle to make a hand with your remaining cards, improve your multiplier and live to fight another day.

The massively addictive Sage Solitaire shuffles to Android in February

Sage Solitaire - A superb mash-up of solitaire and poker