Rumble Stars is adding to its roster with the addition of a blowfish called the Sticky Puffer. If you've not played Rumble Stars yet, check out our review where we thought it was pretty darn good.

The Sticky Puffer will bring new defensive and offensive tactics to the pitch. Once flung it will stick to almost anything that it encounters on the way, whether that's your teammates or opposing players. The pufferfish looks to continue in whichever direction you choose to throw it until it comes into contact with a wall.

This brings to mind several possible tactics. Defensively it can be used to stop and promptly remove an opponent who might have breached your defences and is now through on goal. It does look like it can stick to multiple Rumblers as well so it could be a good counter for that pesky mob of hamsters. 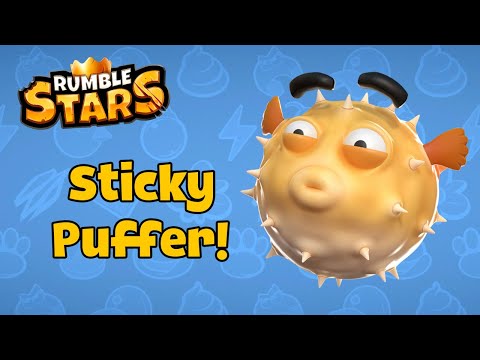 Meanwhile, offensively it could be used to transport one of your less mobile Rumblers higher up the pitch. Did you slap down a Hipdozer to use its mass to block a shot? Well, now you'll be able to push it further up the pitch far quicker and put it into a goalscoring position using the Sticky Puffer.

There are probably numerous other ways this will be useful that my mind can't even comprehend. So if you're looking for far more useful tips or just looking to get started, check out some of our guides.

The Sticky Puffer will initially be available from the Puffer Parade Event which starts on 15th August. From there it will be available in chests as of 22nd August. If you've not kicked off your career with Rumble Stars yet then it's available now on the App Store and Google Play.