Big news for fans of Peggle-RPG fusion Roundguard as the new Treasure Hunter update adds a mass of new content to all versions later today.

The Roundguard Treasure Hunter update is absolutely jam-packed with new features, from daily challenges through to new unlockable rewards. The daily challenges are definitely the main focus for me, as Wonderbelly are introducing new modifiers to each challenge as to mix things up. These new effectors range from the fun-sounding Zero Gravity to incredibly challenging 'Defeat the room in two turns or die'. Beating these daily challenges will reward players with golden puzzle pieces which can be used to complete puzzles that reward you with new relics and properties for use in the standard game runs.

In addition to this, the new update adds four new relics to the game which can be earned through getting higher scores in the normal play mode - these are based entirely around optimising runs, perfect for those already familiar with the RPG puzzler. 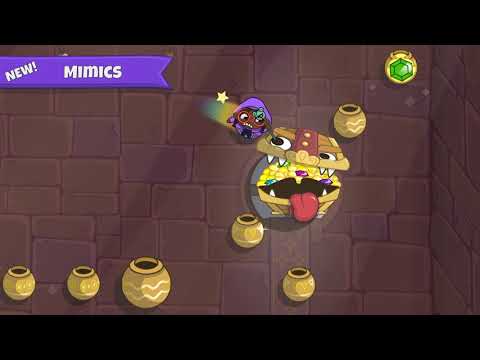 There's actually another feature included in the update which is also targeted at experienced players - seeds. You'll be able to type in seeds, which will give you exactly the same dungeon every time. This is a great feature if you have a few pals who are also playing the game, or if a community springs up around sharing challenging levels with each other.

Finally, there's also a new enemy: The Mimic. As if there wasn't enough risk in the game already, now the odd chest could instead be a deadly mimic. That said, if you can beat a mimic then there's plenty of gold in it for you - probably from previous adventurers that it has consumed.

The RoundGuard Treasure Hunter update will be going live across Apple Arcade, Nintendo Switch, Xbox One and PS4 imminently.

Head to the Pocket Gamer LaunchPad hub to find all of our exclusive announcements from our three-day event.
Next Up :
Princess Farmer combines match-3 puzzles with an engaging narrative, out now on iOS and Android