Let's get some opinions

Read Only Memories (or ROM) is a cyberpunk thriller in which the world's first ultra-intelligent machine teams up with a struggling journalist as they investigate the dark, secretive streets of Neo-San Francisco.

To find out whether the game holds true to its promise, we asked our elite team of mobile game lovers, the App Army, to give us their honest opinions. So, what'd they think of it? Let's find out.

Don't forget, if you like the look of the game you can download the first chapter totally free on the App Store or Google Play.

In my humble opinion the game title should be changed to 'Sleep Only Memories'. I made two attempts to get into this game, but failed every single time because my eyelids got so heavy that I physically couldn't carry on. I don't quite understand the decision to use only one-third of a screen for art. What is all that black space for?

From what I managed to grasp is that story takes place in 2064 and technology is an even more indispensable part of human life than ever before. You collect different items into your inventory, which supposedly can be used at a later stage, but I'm not sure about that.

The story features a ton of tech jargon and futuristic lingo, which may have added to the bouts of sleepiness. I'd love to hope that the story ramps up the pace eventually, but I fear that I will never find this out as five minutes of gameplay replace the best sleeping pills out there.

I quite like the game so far, but admittedly I'm not too far in and it is pretty slow - this seems to be a design choice. Its graphics are a herald back to the 16-bit age and remind me of something I would have played on my Amiga back in the day.

I love the cyberpunk/anime aesthetic and some of the sound effects also raise some nostalgic memories. I'll likely play to completion.

Read Only Memories is one of many 16-bit games out there right now and, while the nostalgia thing is nice, it's not enough to get me to invest time and money. I need a good story. ROM has what seems to be an intriguing story, including the irony of an advanced, thinking and 'self-deterministic' robot named Turing.

If this was a free game I’d probably be tempted to play through to the end, if for no other reason than see if the Dev has more clever bits in store, but it's not free. To get past chapter one, and to have in-game saves, you have to buy the full version and I just don't find it that interesting. I've played through the first chapter, but I don't see myself paying for more. 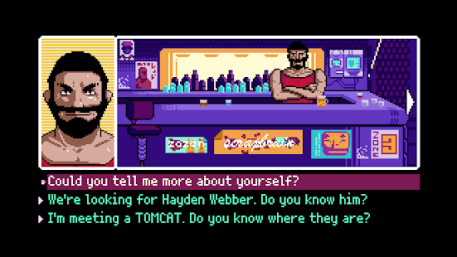 I'm loving everything about this game. I played Snatcher back in the day and Read Only Memories is heavily reminiscent of it. The port from PC appears well done and I didn't run into any glitches, however I'm disappointed that the game doesn’t support the full screen of the iPhone X.

The visuals and audio are appealing to me, and I love the limited colour palette and bright neon 80s style cyberpunk vibe. The music is suitably synth heavy pop. The themes explored by the story resonate with me as well - What does it mean to be human? If an AI can truly embody sapience, how are they different from us? Who decides? How are you aware of your own humanity?

Definitely recommended for fans of narrative based sci-fi and cyberpunk adventures.

I can't help feel that it was all a bit messy and slow paced. The screen space wasn't used very well, so it left the UI feeling too cramped. The finicky navigation and small screen space really put me off and added some unnecessary frustration at times. In general, it just isn't very accessible.

That said, it looks beautiful, sounds great, and is everything you could want from a retro sci-fi cyberpunk narrative adventure.

If you enjoyed the first episode, it's well worth pursuing, but if you're turned off by the initial gripes it doesn't really get any better.

I like the feel of this game, but something just didn't click with me. I think this was down mainly to the slow pacing. I wasn't keen on the screen layout especially for smaller mobile screens.

The music was nice enough and the graphics just about cover the basics. I certainly wouldn't pay for further chapters, but I think it may appeal to some.

ROM is definitely a bit slower paced than I like, but I love the pixel cyberpunk design and it's interesting that I had a choice. Those choices seemed to matter to the characters and would eventually help decide the game's ending.

Although you can play this on a small screen it did feel like a bit of a struggle, and sometimes the graphics themselves made it difficult to find things.

If you made it past the free chapter and didn't get bored then definitely try the rest of the game, otherwise walk away. 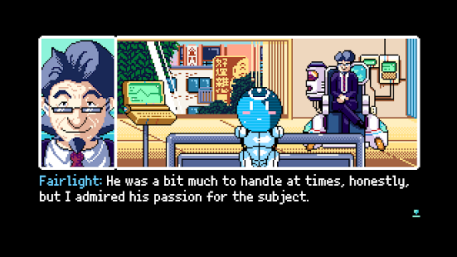 It's a bit slow in pacing, but a really interesting exploration of ideas. If you're a fan of the point and click genre or sci-fi philosophical expositions, I'd recommend trying out the free first chapter.

I'm puzzled that full voice acting did not get ported from the Switch version, but perhaps that's one for future updates.

This game was very slow to start and I nearly gave up in favour of watching paint dry. However, this is an App Army Assemble and I carried on. To be fair, once I turned my expectations down a few notches I began to enjoy ROM.

There is a heap of narrative to get through, the tasks you have to do are not difficult and as you settle into the plot it all begins to gel. The graphics are old-school, the music monotonous, but the actual gameplay is straight forward and easy to master.

I breezed through the first chapter which was free, but after that you have to pay to play. I liked the game, but not enough to buy it so I guess I'll never know what happens next.

I found many pros and cons to the game. The art style was great and the music along with it, but the pace of the game felt far too slow for me. The premise of this dystopian future is intriguing though not really enough to keep me playing.

I felt like this was better suited to either a Plus iPhone or an iPad as my iPhone 7 felt a little too small and fiddly. A good little game if you're into your point and clicks, but not so much if you want a fast paced game.

ROM really is a visual novel. While the visuals are nice, and the music is great, be prepared for dialogue trees. So far I've found the writing a little uneven and the world a little less realized than I hoped from the start.

I'm sure a deeper dive will reveal more to love, but so far I'm having trouble staying focused. Nonetheless, I'm sure fans of the genre will have a greater appreciation.

To join, simply follow this link to the page on Facebook and request access. We'll get you in right away!
Next Up :
App Army Assemble: PomPom: The Great Space Rescue - "Do this platformer's fresh mechanics make it a must-play?"