There comes a point when every retro remake developer has to make a decision. Do you throw everything behind your 20-year-old classic and hope things haven't moved on so far that it's now obsolete, or do you have a play around to make things more accessible to a modern gaming audience?

Rod Land has plumped for the first of those two options, and so it presents you with a tough-as-old-boots arcade experience. It's a cry of 'you don't know you're born' to a generation weaned on regenerating health and infinite continues.

But it also drags with it baggage long since cast off by modern gaming, and ultimately ends up as a reminder that things move on for a reason.

The game sets you the task of clearing a screen of enemies, be they bouncing blobs of grey sludge, waddling sharks who fire bubbles at you, or bizarre green creatures that could be camp lizards. Each screen is split up into platforms, joined together with a series of ladders.

The dastardly denizens of each level can scuttle along the ladders as easily as you, and a single touch from any one of them will kill you outright. It's a good job, then, that you're a fairy with a super special magical rod, or all would be lost.

Your rod, or wand, can stun anything that gets too close to it, then trap it in a bizarre magical force field. Once ensnared, you can repeatedly bash a creature on its head until it dies and drops a boon that you can use to kill something else.

Learn to control your rod

Each level is also covered in flowers. Collecting all of these unlocks a special extra game mode, where enemies move faster but if you kill them all within the time limit you receive one fifth of an extra life.

You control your fairy with an on-screen D-pad and buttons. A unleashes the power of your rod, and B creates a magical pink ladder that you can scramble up if need be. The ability to create your own escape routes is a nice touch, but the controls pose their own problems.

The D-pad sits in the bottom-left corner of the screen, so if there's ever anything happening down there, the action will be utterly obscured by your thumb. The buttons don't always recognise your taps, either, and when you need to hammer A quickly to smash a shark's head that's just not good enough.

Rod on so many levels

Rod Land's main problem, though, is how unflinchingly cruel it is. A single touch will kill you, instantly, even in the extra game mode. And there's no tutorial - just a help menu that tells you how to play, hidden away in a corner on the title screen.

Rod Land makes no concessions for the hardware it finds itself on, or the era in which it's been resurrected. Nostalgia buffs might think that's a good thing, but when mixed together with shoddily implemented controls it's a recipe for frustration. 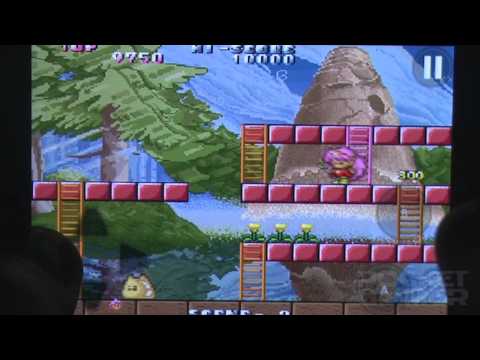 A retro remake with a real sadistic streak that fails to bring anything other than frustration and annoyance back with it
Next Up :
Star Discord review - "Needs polish, but it's shaping up to be a true RTS on the go"

Spare the Rodland, spoil the child