It all begins with a blocky little man holding a fishing rod over the side of a boat against a fairly unremarkable blocky backdrop.

You tap the screen to cast your line, tilt your device to steer your plummeting lure around the assorted marine wildlife until you unavoidably hook something, steer again to catch as many fish as you can on the way back up, and then tap the screen to shoot the entire haul as it bursts out of the water and into the sky.

At first, each attempt on the water is just a brief interlude that allows you to earn money to spend on equipment that will allow you to catch more fish next time. Being in the shop is as fun as being at sea.

You start with a basic line, lure, and gun. After a few rounds you might decide to buy a longer line, allowing you to go deeper and catch more fish. With the extra money this brings in you might buy a Chainsaw Lure, which lets you churn through sea animals until your fuel runs out.

Once you start to encounter the really expensive power-ups you need to knuckle down and start thinking strategically, not least by following the game's cult film-quoting advice to, "take dead aim at the rich fish".

You also have to physically play better, honing your swerving and dodging skills, learning how to time your saw bursts, and avoiding the score-sapping jellyfish both under and over the water.

After catching a certain number of species you open up new, deeper maps, necessitating longer lines, lamps to illuminate the abysmal depths, and more powerful guns to shoot the larger hauls out of the similarly expanding vault of the sky.

Descending carefully all the way to the sea bed through colourful strata populated by increasingly exotic fish gets more satisfying and ethereal as your powers increase.

Ridiculous Fishing seems fairly unexciting when you first boot it up, but it blossoms as you play, from a brittle pick-thin sapling of arbitrary grind into a thrumming, meticulously balanced garden of exotic flora that gets more and more exciting the deeper into it you go.

At first you'll wonder what the point of its ridiculous three-stage fishing process is, but soon enough you'll find yourself playing it at two in the morning, trying to unlock the last of the power-ups and catch the last of the fish.

The deeper you manage to go the longer it takes to reach the surface again, and so the bite-size rounds get less and less bite-size as you improve - and, depending on your mood, less and less fun.

And the grinding only takes you so far. Once you've unlocked The Maelstrom, bought the Infinity Reel, and kitted yourself out with killer gear Ridiculous Fishing effectively becomes an endless-runner with online rankings. There's nothing innately wrong with endless-runners, but it's a shame that the innovation is confined to the first few hours.

But these are minor criticisms, because in its least fun moments this is still better than most games.

I've come to think of Ridiculous Fishing as the unofficial game of Wes Anderson's movie The Life Aquatic. It's similarly colourful, bizarre, imaginative, and willing to venture into deeper emotional waters from time to time. More importantly, it demonstrates that indie games aren't just for indie gamers - anybody who gives Ridiculous Fishing a try will be hooked. 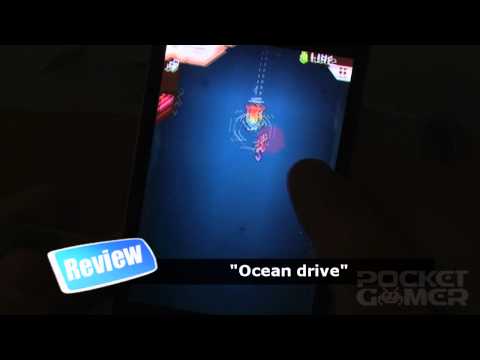 Ridiculous Fishing may have a strange premise, but give it half an hour and it blossoms into one of the most innovative, well-balanced, and addictive games of the year
Next Up :
Otaku's Adventure mobile review - "A truly bizarre love triangle"