IDC: Android tablets to topple iPad by end of 2013

A surge of interest in smaller, cheaper tablets will push annual sales beyond initial estimates in 2013, and result in Android devices toppling iPad by the end of the year.

That's according to the latest findings published by IDC, which predicts just shy of 191 million tablets will be shipped to market during 2013, up from the firm's previous estimate of 172.4 million units.

More interestingly, however, is the fact that a wider consumer shift towards smaller tablets will, in IDC's view, boost sales of Android devices, and not Apple's market-leading iPad.

"One in every two tablets shipped this quarter was below 8 inches in screen size," said research analyst Jitesh Ubrani.

"And in terms of shipments, we expect smaller tablets to continue growing in 2013 and beyond.

"Vendors are moving quickly to compete in this space as consumers realize that these small devices are often more ideal than larger tablets for their daily consumption habits." 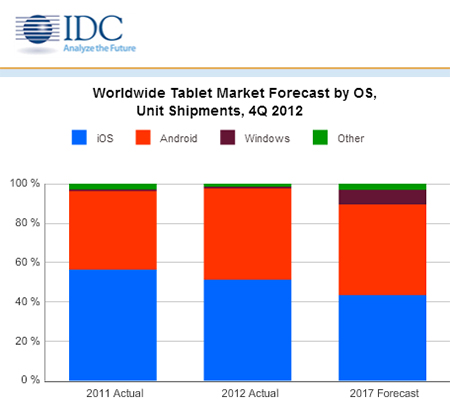 The rest of the market over the coming years will be made up by Microsoft's Windows 8, which currently accounts for 1 percent of all shipments, rising to 7.4 percent by 2017.

Windows RT – which runs on Microsoft's Surface RT – will sit stable at around 3 percent of the market.

"Consumers aren't buying Windows RT's value proposition, and long term we think Microsoft and its partners would be better served by focusing their attention on improving Windows 8. Such a focus could drive better share growth in the tablet category down the road."

Number of Chinese mobile game payers up 5-fold during 2013

Chart of the week: Half of in-game revenue generated by just 0.15% of players