The card-swiping successor Reigns: Her Majesty heads to iOS, Android, and Steam later this year

Hallelujah, the day's finally here. Yes, we've gotten wind that Reigns: Her Majesty is on its way and it's rather exciting. 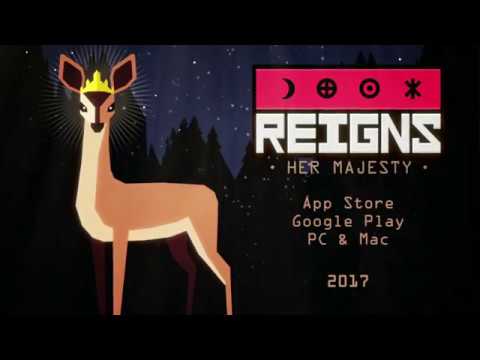 Posted on their YouTube channel yesterday, Devolver Digital has launched a quick 45-second reveal trailer showing off just a few of the choices and story archs. From the looks of things, this time around the choices may focus a little more on the emotional side of things as well as the logic and brute force approach.

As it states on the video's bio, "A cultural renaissance has bestowed the world with a new era of knowledge and enlightenment but greed and jealousy still conspire against the benevolent queen. Outwit and outlast those that would seek to depose you and your husband by swiping left or right, making just (or unjust) decisions on all manner of royal matters. Maintain the balance between the kingdom’s most powerful factions, use mystical items from your inventory, and navigate the increasingly complex politics and personal relationships of your dynasty."

It'll be interesting to see how this successor compares to its multi award-winning predecessor, Reigns.

There's no release date just yet, but we'll be getting it on iOS, Android, and Steam before the end of 2017.