The bad news. You can't move in Razor: Salvation. The good news. You have a lot of guns

Developed by Blowfish Studio, they demonstrated the graphical quality of the futuristic shooting gallery-style game.

Still, the impressive graphics are nothing less than what gamers would expect from Blowfish Studios, which was also responsible for Siegecraft.

In the game, you're rooted in a single spot but have a full 360 degree view of the surrounding area.

From this fixed vista, players will have to hold off swarms of aliens with a robust arsenal of weapons while rescuing vulnerable civilians from the alien onslaught.

As if the console-grade graphics and Beach Head defence style of gameplay weren’t enough to whet a fragger’s appetite, it's reported that the game will include an online multiplayer mode.

This will require players to form factions with friends, also granting the ability to compete with factions from around the world. Online leaderboards will track the performance of factions that kill the most aliens and rescue the most civilians.

Razor: Salvation is expected in May or June as a Universal App and will include full support for the new iPad's Retina display.

There's no in-game footage yet, so we'll have to make do with the teaser video. 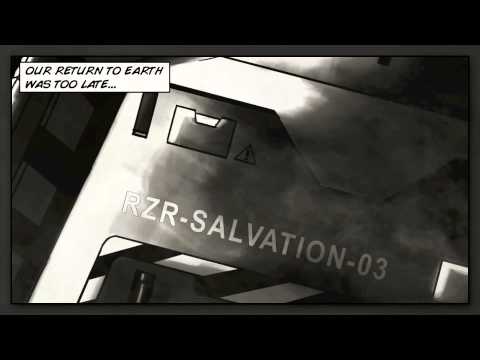