Ravensword: The Fallen King was a noble yet flawed game, notable for its charm and its adventurous spirit, but held back from achieving its full potential by a critical lack of intelligence and depth.

After an epic three-year gap, the series is back in the form of Ravenswood: Shadowlands. The follow-up is an altogether more seasoned, capable traveller, but it still has a few character flaws that cost it a little come the final reckoning.

This is as big and open an RPG as you're likely to get on iOS. Crescent Moon offers you a world comprising a bunch of decent-sized hubs, cities, villages, and caves.

Some of these are mission-critical, as you follow the game's predictable fantasy story. This entails chasing up a bunch of Ravenstones in order to obtain the legendary Ravensword so that you can use it to, well, you know the score. Shakespeare it ain't.

Other areas of the world are free for you to explore as you wish, and these are useful for levelling your hero up, acquiring valuable loot to sell or equip, and completing the many optional side-quests you're given.

You can even go hunting, with each area containing its own unique wildlife, including boar, wolf-like wargs, and towering rhino-like creatures, to name just a few. These also yield up food for your hero to live off.

You'll eat automatically, so it feels a little pointless, but it's evidently an incentive to keep swinging your axe, sword, hammer, or whatever.

Ravensword: Shadowlands's combat is its key weakness. Engaging enemies one-on-one is a pretty basic case of tapping the virtual 'attack' button when in range, although the need to block from time to time does add a certain depth.

The trouble is, in tight corners and tricky situations it's both frustratingly punishing and ridiculously easy.

Get attacked by two swift-moving sword-wielders at once and it can be impossible to get off a shot, with each nimble strike tying you up for a second - just enough time for the other attacker to get in his own jab.

Switching between ranged and melee weapons on the fly can be really fiddly in pressure situations such as this, where you're forced to back off and launch the odd attack when you can. And having to lift your finger off the 'attack' buttons to constantly modify your view can be maddening.

Meanwhile, on the flip side of the coin, the AI is so dumb that it's often possible to jam certain tough enemies on the other side of a tree or rock while you either heal or ping fireballs or arrows at them.

The first game took a bit of flak for being a bit too light on the RPG mechanic. While Ravensword: Shadowlands won't be challenging any of the top console RPGs for depth, it does represent a solid step forward.

You can attribute skill points to a number of areas as you level-up, allowing you to specialise in ranged, melee, or magical combat, as well as improving your athleticism (there's a dedicated 'jump' button here, oddly) and even stealth abilities.

You can also acquire new weapons and armour at shops or through good old dungeon-crawling, and imbue your blades with extra abilities using special gems.

The inventory menu is a bit of a mess - once it fills up it can take ages to scroll to the weapon or health potion you want - but otherwise this is a solidly structured RPG.

Speaking of menus, both of the maps in the game are pretty useless. The zoomed-in live map is too zoomed-in, making it hard to get your bearings, while the large overmap lacks essential detail.

We criticised Ravensword: Shadowlands's plot, but in truth it has a fair crack at injecting a little personality and humour into proceedings. We'd like to see this a little more consistently applied, but the odd light touch in amongst all the po-faced quest-giving is most welcome.

This is a stunning world to spend time in. It's a succession of impressive vistas that simply force you to stop and drink it all in. Sure, some of the textures are a little basic, and there's a bad case of pop-up in the open-world areas, but the art style and the generally solid feel of everything makes for a truly cohesive world.

Indeed, Ravensword: Shadowlands's immersive world, improved RPG systems, charm, and polish make it one of the best iOS RPGs of 2012. The wait may have been epic, but it was well worth it. 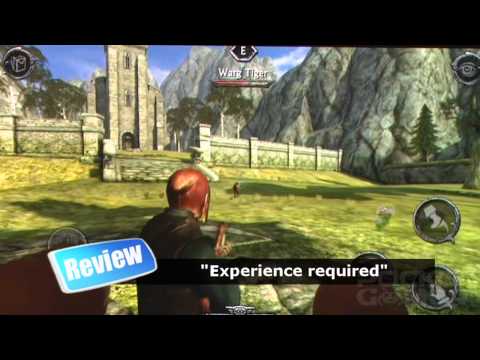