Quadropus Rampage is an aquatic-themed endless roguelike from the developer of Towelfight 2: The Monocle of Destiny

Do you enjoy beating up terrifying crustaceans with household objects?

Then, Quadropus Rampage is probably going to be right up your very specific alley.

Made by the developer of the Silver Award-winning Towelfight 2: The Monocle of Destiny, Quadropus Rampage is an endless roguelike in which you descend to the depths of the ocean to punch Pete, the god of the sea, in the face.

Rather unsurprisingly, you play the titular fantasy creature. You carry out your rampage using a simple combat system involving unleashing a series of attacks and then dodging out of the way when things are looking tough. 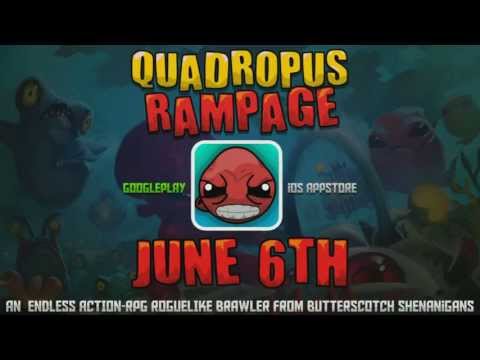 You earn XP through fighting and killing. In turn, your level and health is increased, enabling you to push deeper through the randomly generated mini-dungeons.

And when you do inevitably die, you can spend some of the cash you've earned on upgrading your stats to make sure you get a little bit farther next time around.

It should have gone live on Apple's App Store overnight, too, but a couple of problems with the final build meant it was rejected and then resubmitted. According to Butterscotch Shenanigans, it's "stuck in the Apple pipes".

We'll update you as soon as Quadropus Rampage surfaces on the App Store.