iOS
| Puzzle to the Center of the Earth

Puzzle to the Center of the Earth is an intriguing mix of a match-three puzzler and a simple platformer that's set to hit the App Store this Thursday.

The game sees you playing an intrepid explorer delving into the depths of the earth.

Strangely enough, the rocks under his feet are actually brightly coloured blocks, and you can get rid of them by connecting them in groups of three.

You clear space for your little avatar, then send him scuttling through the gaps you've created to plunder treasure.

You only have a set amount of energy in your matching machine each level, but you can collect more by smashing blocks with glowing green gems in them.

Gold gems get you extra currency to spend in the shop. 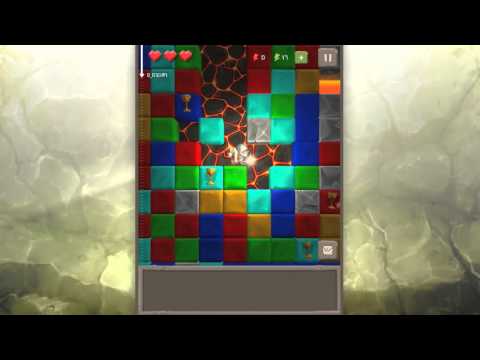 There's also something called formulas. You gain the energy to perform these by matching six or more blocks.

The first one you receive lets you match a blue block, a red block, and a green block, to create a huge explosion.

You've only got a limited amount of health though, and heavy falls and standing near explosions will eat a chunk out of it.

There are tools you can buy to negate some of the effects though.

I've played about 20 minutes of the game and it certainly feels like there's enough fresh ideas here to keep you interested for a decent while.

The game should hit the App Store on Thursday, and our review should be on the site later in the week.

Puzzle to the Center of the Earth

Out at midnight: Puzzle to the Center of the Earth is a mash up of a platformer and a match-three for iPad and iPhone

What if Spelunky was a match-3 puzzler?