Over on the Pokemon X and Pokemon Y site, it's been revealed today that your Pokemon will be able to undergo Mega Evolution during battle in the upcoming Pokemon X and Y titles for the 3DS.

In order to trigger the Mega Evolution, you'll need to search the Kalos Region for Mega Stones. Each of these stones is named after the Pokemon to whom its power is relevant.

One of the Mega Stones, Blazikenite, will not be discoverable in the game. Instead, you'll find it via a limited time wi-fi character distribution event that takes place on the Nintendo Network on October 12th (the day Pokemon X and Y are released).

Participating players will receive a Torchic with the Hidden Ability, Speed Boost. By evolving this Torchic into Blaziken, you will be granted a Mega Blaziken with the incredibly powerful Speed Boost ability.

Also announced for Pokemon X and Y is Super Training. This enables you to train your Pokemon outside of battle.

A more casual version of this training session is Core Training. Here, the Pokemon raise their stats by themselves. By tapping the screen during these sessions, you can also help to increase your Pokemon's base stats.

Gym Leader Korrina was also announced today. You can find him in the Kalos region. He is said to hold the power to Mega Evolution. 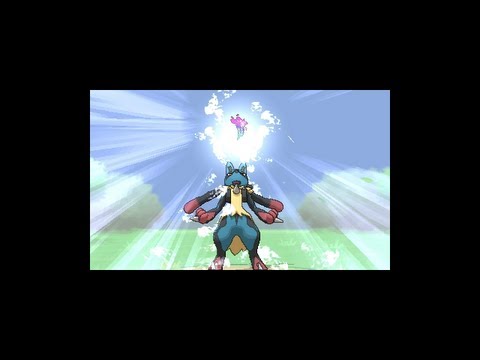 These are an Electric and Fairy-type called Dedenne; a burrowing Normal-type called Bunnelby; and a gentle Grass-type called Skiddo. That final Pokemon evolves into Gogoat.

Pokemon X and Y will be released on the Nintendo 3DS on October 12th.