Oh cool a new Pokemon game on mobile! I mean, after Pokemon GO we're all waiting to see what's next for the franchise on our phones, so this is going to be something special and exciting, right? Let's have a look.

Er. What? It's all about Magikarp? Well it is called Magikarp Jump, so I guess that was to be expected. Maybe it's a cool autorunner that sees you... Oh. It's not that is it? It's a tamagotchi game with some clicker bits.

Right then. That's, disappointing, I guess? Still I'll stick with it, for review purposes. Oh and now my Magikarp is getting a massage from the mayor. And I've got a Pikachu. Ooooh and I can upgrade my berries. And now it's two hours after I started.

This is the process that I went through when I first loaded up Magikarp Jump. It is a game that's both utterly content in its lunacy and surprisingly staid at the same time. It's a game about a competition involving bouncing fish where you don't get to bounce any fish.

But it's strangely compulsive all the same. It's about growing your flopping fish to be the greatest leaper the world has ever seen.

Other Pokemon make cameos as well, hanging around your pond and giving boosts to your Magikarp when it needs them most. 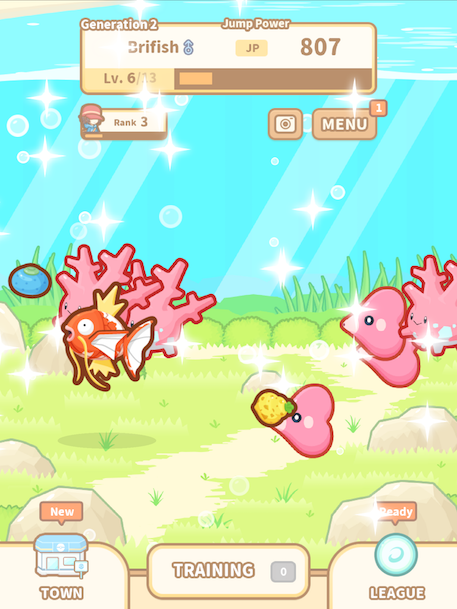 The game is split into a number of different parts. There's the pond where your fish lives, where you tap or swipe the screen to feed it and upgrade its JP (jump power, obviously).

Then there's training, where your Magikarp bashes out a few rounds of boxing or jumping to toughen up. Lastly there's the leagues. Here you'll take your buffed up Poke-fish to leap against others. Win and you'll move to the next round.

You don't have any control over any of these things, and there are various wait timers that slow down your progress. But it's still somehow entertaining.

You can decorate your pond, hire new Pokemon, and eventually your Magikarp will reach its highest level and retire. Then it'll sort of swim around in the background judging your new Magikarp's skills.

The whole thing is complete nonsense. But it's the sort of thing you'll want to pop in to every now and then. It's no Pokemon GO, not by a long shot, but it is a fun diversion from an otherwise awful world.

A game that mixes nonsense and idling into a strange but compelling package
Next Up :
Hero Emblems II review - "Lovely visuals and music, but match-3 combat lacks strategic depth"

Be the best Magikarp you can be in Pokemon: Magikarp Jump, out now on Android