Pixel People typifies a new style of gaming where the only real goal is to keep playing. There are no bosses and no end game to speak of. If the design of the game succeeds, you will keep playing until you die of old age.

It adds a few gene-splicing tricks into proceedings, but to all intents and purposes this is a city-builder with a charming pixel facade. You build your cute little sky town, populate it with cute little characters, and watch them flourish, cutely, under your adoring gaze.

The twist is that you need to genetically manipulate your population by combining its members. You start with a mayor and an engineer, then splice them together to create a bobble-headed pixel human with a new role to fulfil.

There are 150 different humans to create through your scientific machinations, and you need to find space for them all to work, play, and fall in pixellated love. Splicing, like everything else in the game, is controlled with a few simple taps.

A lot of the genetically engineered characters you create will bring new buildings with them, and you'll need to find somewhere on the map to put them. You've got to build houses, too, or you won't get any more people coming to visit. No visitors means no raw genetic material to tamper with.

Different buildings perform different tasks. A Utopium mine slowly replenishes your stock of the game's currency, while a construction yard will let you build roads, and a nursery lets trees sprout up around your city.

Pixel People is all about the illusion of control. You might feel like your city is your own, but really you're just a steward, tapping 'yes' when the time is right, and letting the game take care of the rest.

It's nice to watch your city spread across the stars, and at least the different characters you have to collect give the game a semblance of direction, but the splicing connections are arbitrary at best, and the lack of any real gameplay or challenge is telling.

The problem a lot of people will have with Pixel People is the same thing that will make it so appealing to others: there's really no engagement here. You're playing a game you can leave alone for long periods of time, get the occasional giggle out of, and throw a bit of cash at if you want to speed things up.

If that sounds like your cup of tea, then you'll enjoy Pixel People. If you prefer your games to have a bit more gaming in them, it's best avoided. 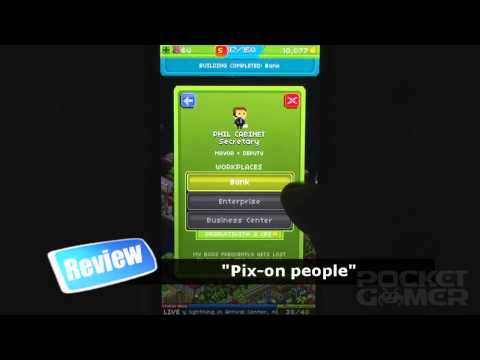 While it does what it does very well, Pixel People doesn't have the balance or challenge needed to break the shackles of the genre it inhabits
Next Up :
Catalyst Black review - "Gorgeous visuals, smooth gameplay and fun-filled fights"

Good times are here to stay!