Pine Creek is an adventure game that focuses on exploration, story and following clues. You make friends, think about life and death, eat tasty food and play games in the arcade. It sounds a lot like my own life, except there’s also a darker side to this story. 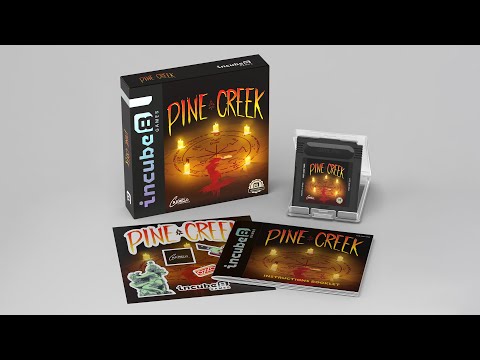 In what may be a very David Lynch-esque slant on the story, the town of Pine Creek has experienced the disappearance of a young girl, with the theory that a cult is behind the crime and other ritual killings being popular amongst the townfolk.

With these mature themes in mind, Pine Creek is certainly aimed at an adult audience. It may also appeal to gamers of a certain age with its 2D pixel art and Twin Peaks-style setting.

Pine Creek will be available as a physical cartridge, meaning the game is currently going through a period of pre-orders to ensure the stock meets the demand. If you’re not a collector and would prefer to just play the game at a cheaper price, you can also buy it as a standalone digital ROM.

The Collector’s Edition includes a sealed box, cartridge protector, game manual, a red game cartridge, stickers sheet, a poster of the game, and the soundtrack available as a CD and digital download. It will also have a numbered certificate of authenticity, with there being a limit of 200 copies.

Check out Pine Creek and pre-order a copy from the official website here. The pre-order period lasts from now until 9th August, with a planned shipping date of October 2021.

Be sure to read about some of our favourite adventure games on mobile here too.
Next Up :
Black Desert Mobile reveals new Drakania class alongside other major updates and announcements