The Sun seems to have it in for Nintendo's 3DS. Yesterday it ran a story called '3DS SOS' on its front page, reporting that 3DS units were being returned in “record” numbers after users complained of headaches and dizziness. GAME and Nintendo swiftly refuted the claim.

Not to be deterred, The Sun today published a story claiming to demonstrate the 3DS's deleterious effects on human health with the help of “Sun doctor” Carol Cooper in an article entitled 'Nintendo 3DS Game for a Barf'.

The study - which doesn't appear to be peer reviewed - consists of blood pressure and heart rate measurements taken at regular intervals over a two hour period from a 22-year-old man playing on a 3DS.

The first measurement, taken before the experiment starts while subject Lee Price is seated, is 120/70 and 66 bpm. Healthy numbers. Then he starts to play.

The Sun doesn't indicate how far up the 3D slider is set, and therefore how pronounced the 3D effect is, but we'll charitably assume it's set to the same level – probably maximum – throughout the experiment.

The second measurement is taken at 30 minutes, and reads 127/72, with a pulse of 66. “I sat on a sofa and feel OK so far - a slight headache, but nothing extraordinary,” Lee says.

For the next measurement, at one hour, Lee stands up. His blood pressure at this stage is 130/74, with a pulse of 69. Doctor Carol observes some nystagmus, where the pupils move rapidly from left to right. In Doctor Carol's words, this is, “caused by your eyes taking something in your body can't feel.”

Which makes no sense.

For the fourth measurement, at 90 minutes, Lee is walking and playing at the same time. His blood pressure is 135/80, with a pulse of 82. “If this was your resting rate,” says Doctor Carol, “I'd recommend you saw a GP about high blood pressure.”

But he's not resting. He's walking. And in any case the GP wouldn't treat it because the current treatment threshold for high blood pressure is a sustained systolic over 160 or a diastolic over 100.

The measurement at two hours is taken while Lee is sitting in the passenger seat of a moving car. Playing the 3DS in these conditions makes him feel “nauseated”, and his blood pressure reaches 140/84. “If this rate is sustained for a long period it could damage circulation,” says Doctor Carol.

But she doesn't indicate what she means by a "long period", and in practice a 22-year-old man would need to maintain a resting systolic blood pressure greater than 140 (the lower limit of stage 1 hypertension) for a period of months, even years, before a GP would consider treating it.

Of course, we'll never know whether Lee's resting blood pressure would have reached 140/84 if he'd been allowed to play the 3DS in a seated position for the full two hours of the experiment.

We just know what his blood pressure is when he tries to play on a 3DS while standing, walking, and experiencing motion sickness – all of which would no doubt have raised his blood pressure even if he were reading a book, or, say, a copy of The Sun.

YOUR BLOOD PRESSURE AND THE SUN - POCKET GAMER INVESTIGATES

Pocket Gamer has uncovered startling evidence that reading The Sun newspaper while standing up, walking, and travelling in a car may have an effect on your blood pressure.

The Sun is currently the biggest-selling tabloid newspaper in the UK, with an average circulation of around 3 million copies a day.

We sent our man Mike Rose out with the newspaper to investigate. Pocket Gamer nurse Jane measured Mike's resting blood pressure and heart rate at the start of the experiment: it was 112/67 and 59 beats per minute.

Mike then read The Sun in a seated position for half an hour.

THIRTY MINS: Blood pressure: 133/73. Pulse: 71. Mike: I sat and read The Sun. I felt nothing. Nothing at all. ONE HOUR: Blood pressure: 126/69. Pulse: 79. Mike: I stood up and read about some celebrities doing some things with some other celebrities. Nurse Jane detected some nystagmus, where your eyes race from side-to-side, but noted that this was probably because I was reading. 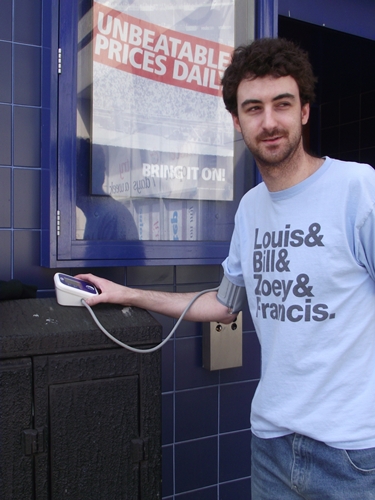 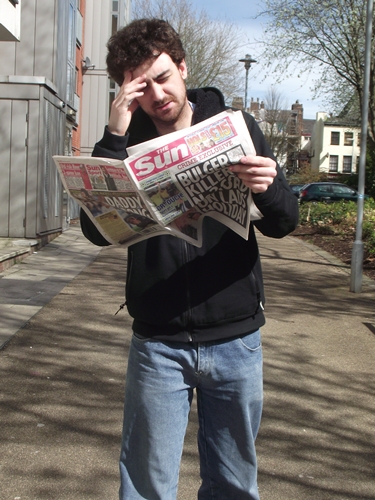 TWO HOURS: Blood pressure: 153/83. Pulse: 124. Mike: Reading while in the back seat of a taxi. Feel quite ill. Taxi driver starts conversation about the dangers of the 3DS. 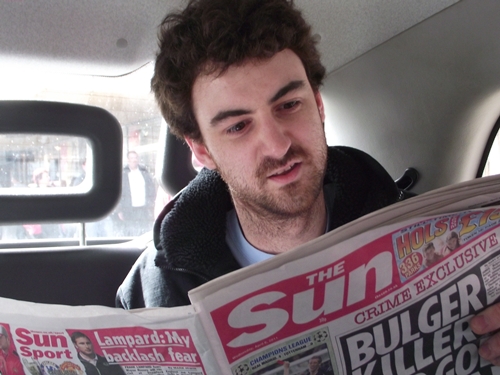 MIKE'S VERDICT: In my opinion, children should not be left to read The Sun for hours. Flawed blood pressure comparison chart
Next Up :
Identity V's fourth anniversary celebrations continue with the Bernstein's Haze event