iOS + Android
| Order & Chaos 2: Redemption
We're trying something a little different with our review of Order & Chaos Online 2: Redemption. It's a huge MMO, so giving you our impressions after a couple of hours of play would be a disservice to you. Instead we're going to be doing a review diary. Ongoing, full of impressions as we get deeper into the game, and probably with some really funny jokes thrown in for good measure. We'll be updating regularly, so make sure you come back to check on our progress, and to see whether we like Gameloft's latest.

Part one: The starting area

The first thing you're going to notice about Order & Chaos Online 2 is how good it looks. It's a feast for the eyeballs, all bright colours and flashing lights and gloomy caves.

The second thing you're going to notice about Order & Chaos Online 2 is that that beauty comes at a price.

On my iPad Air the draw distances for enemies and environmental objects are pretty small, and it's actually possible to back away from a combatant, make the enemies disappear, and then have to fight fully respawned versions of them when you wander back to the correct area.

The game starts off with a prologue of sorts, which sees you playing a powered-up character who grabs a hammer, smashes up an ogre, and then destroys a crystal heart. Cue catastrophe.

It's a decent introduction to the controls and mechanics. You move the camera around by swiping, and can either tap or slide to move around. I found sliding the easiest to get to grips with, especially when your taps are often leading you into the unknown.

After that you select a character of your own. I went for a big pink lizard called Brian, and picked hunter as my class.

Everyone knows that hunters are the coolest because they have bows and arrows. Also I want a pet, so I hope I can get a pet. I haven't checked yet.

There are four buttons in the bottom right of the screen that let you deal damage. One of them is your standard attack, the other three are skills you learn as you play. These can be swapped out for different moves as you learn more.

You've got a pouch as well, accessed by tapping an arrow when you're in combat. You can hold more skills here, as well as potions and other consumables.

Bashing through the starting area is a pretty easy introduction to proceedings, as you might expect. There are two to choose from, and I picked Cliffside.

I killed some spiders and some rats, fought some mutants, and then killed a boss that looked a bit like Bane if Bane had gone through a blender.

This all culminated in me getting a swanky weapon, and a few new skills. And now I'm off to find a captain who's going to take me somewhere, hopefully to more adventure.

So far I'm impressed with the game. It follows the same WoW-aping template of the original, but less slavishly. Sure, it's a cartoon-ish fantasy MMO, but so far it feels like it's got more of an identity of its own.

Hopefully that's something that's going to become more and more obvious as I get deeper into the game.

Part two: A swim on my own 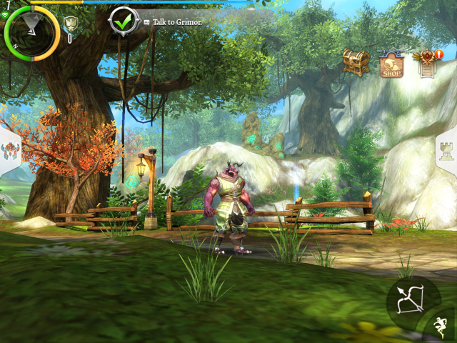 I've encountered a couple more glitches and bugs in the last couple of days. Most notably I got stuck in a pond, couldn't find a way out, managed to shuffle under a bridge, and eventually had to pay some currency to jump back to one of the game's fast travel portals.

The dotted quest-line, which is often a little confusing as well. Sometimes it leads me up over hillocks I can't actually climb, and it disappears after a while, forcing you to jump back into your questbook to make it appear again.

But the game is adding more and more complexity with each step, and it's welcome. There's a sense that in the first few hours you're just scratching the surface of the basic mechanics, and it's clear that there's a weight to proceedings that gets heftier as you go.

There are menus galore, for crafting, auctions, dungeons, dreams, and tournaments. They unlock at different levels, meaning you've got time to figure one out before you have to deal with the next.

You can customise your skillset as well, adding extra inscriptions to your weapons that add new effects to your moves. I can delay monsters with one of my skills now, which as a ranged character gives me more time before they start whomping me.

There's a decent drive to push on as well. Quests are never particularly long, and once you've figured out where you're supposed to be going, you'll finish them in about ten minutes.

It's perfect for mobile play, but an offline mode, or at least something to do without a connection, would make bus rides a little more fun.

The creature designs are pretty spot on. Spiders are all spindly and gross, the Murloc-style froggy merpeople are scaly and vile, and the ogres stomp around scowling and dribbling.

The strange thing is I don't think I've spotted another player in the time I've been running around Order & Chaos 2. Usually you'll have run into someone by this point of an MMO.

Whether this is deliberate, or I just haven't unlocked the right parts of the game yet, remains to be seen. But it is starting to get a bit lonely.

Hopefully by the next update I'll have made some friends, and managed to avoid falling into any more ponds that I can't get out of.

Order & Chaos 2: Redemption is out right now on Android [Update]