If the name given to you at birth (or, in this case, at manufacture) is Odd, then it seems likely that you're fated to live a peculiar life.

Odd is the name of the robot in upcoming iOS puzzler Odd Bot Out. And yes, you could say that Odd is having a bit of an odd life.

Odd was thrown into a recycling plant, either by mistake or out of, presumably, despise. Your task is to help Odd get out of that place.

You do this by constructing bridges, cars, and robot centipedes for Odd to use to traverse each challenge.

You put cubes together, put plugs in sockets, align wheels, and move metal winches. Then Odd moves its spindly legs into position, looking like a newborn giraffe trying to understand how knees work.

It's a puzzle game that looks pretty nifty in the trailer. All of it is physics-based adding some authentic clumsiness to the block building. And electric currents are simulated in the game too. 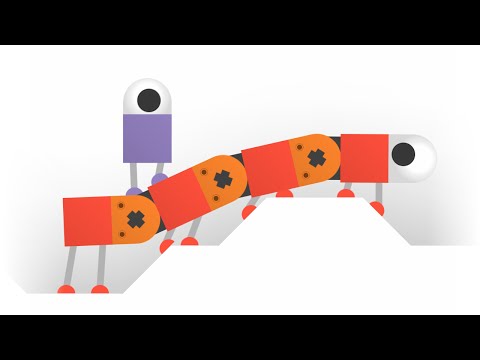 Not to mention the visual comedy of Odd in motion. Seeing that little robot pottering along in the trailer has already made me want to help it out.

Unfortunately there's no telling how soon I'll be able to do that. Solo developer Marin Magni hasn't got a release date yet. But he does say that Odd Bot Out will be "available soon".

Keep an eye on the game's website for more updates as they come.

Thanks Christian V.
Next Up :
Myst Mobile, a new and improved 3D remake of the legendary 1993 puzzler, is due out sometime in the future on iOS