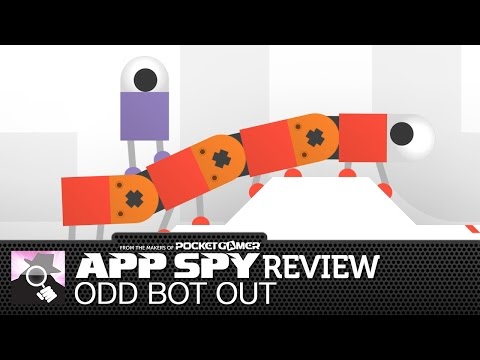 Odd Bot Out is a puzzling platformer with a style all of its own. Its core idea, about a lone robot attempting escape, might not be the most original, but there's a bandy-legged swagger to the experience that's hard not to like.

Throw in some solid touchscreen controls and you're left with a game that'll make you scratch you head and smile at the same time. Which will make you look a bit weird.

You pull your robo escapee around by pushing a finger on him and then dragging in the direction you want to go. You need to drag up to get over steps, and the farther you drag, the faster he goes.

The environment is also ripe for manipulation. There are blocks to pick up, buttons to push, amd other robots to poke around as you try and solve the puzzles the game presents you with.

There are sections that see you picking up your robot with mechanical claws, and others that involve using other robots as makeshift walkways.

There's no hand-holding here though. You're left to work out what you need to do. That can lead to a bit of frustration early on, but once you've got used to things experimenting becomes a lot of fun.

Odd Bot Out is strange in all the right ways. It's clever too, and the levels are small enough that you can easily fit a few into a bus trip or a snatched few minutes.

If you're looking for a cerebral, good looking puzzler, then there's a lot here to like. Jut be prepared to figure things out for yourself.

A clever and well put together platform puzzle, Odd Bot Out might leave you scratching your head from time to time, but it's worth it all the same
Next Up :
Hindsight review - "Deeply emotional but a tad repetitive"