Gaming fanatics have been arguing over consoles and computers since the invention of the microchip.

Whether it's the Spectrum versus the C64, or the schoolyard rivalries of the SNES and Mega Drive, everyone wants to be backing the best device.

With that in mind, we like to conduct head-to-head battles between two popular devices, in a series we call The Tablet Test.

In the first instalment of The Tablet Test, the (now-deleted) iPad 3 went toe-to-toe with Google's Nexus 7 on Phosphor Games's Unreal Engine-powered beauty Horn.

The Nexus 7 is powered by an Nvidia Tegra 3 chipset, with a quad-core 1.2GHz Cortex-A9 CPU. It also has 1GB of RAM. For just £200, then, you're getting a boisterous little tablet at a very budget price.

The iPad mini, meanwhile, is basically an iPad 2 that has shrunk in the wash. It has the same dual-core A5 chip, the same 512MB of RAM, and the same 1024x768 resolution as the second-gen iPad.

Apple's iPad mini has a pixel density of 132ppi, by the way.

Need for Speed: Most Wanted is a fast and furious street racer in which you rise through the ranks to take on the city's top 10 most wanted drivers. You'll also fight off the cops as you head towards the top.

Unlike its console and Vita brethren, this is not an open-world game. It features disparate levels and insular courses (with a few shortcuts here and there).

As mentioned above, this mobile version was made by Firemonkeys, the team currently working on Real Racing 3.

In static screenshots, it's very difficult to differentiate between the two devices. They both have murky textures on road-side props (though you'd normally speed past too fast to notice), and the background details are almost identical.

You will see some jagged edges on the Android edition, mind. If you're playing with the chase cam view on, the cars generally look smoother on the iPad mini. 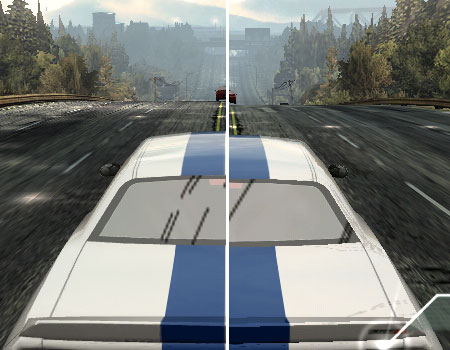 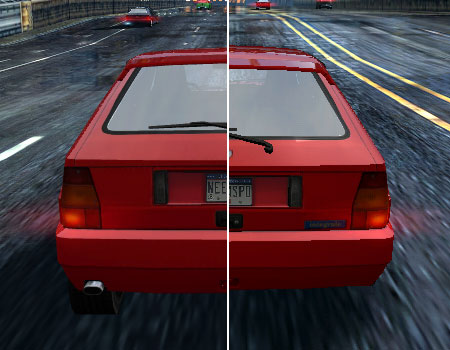 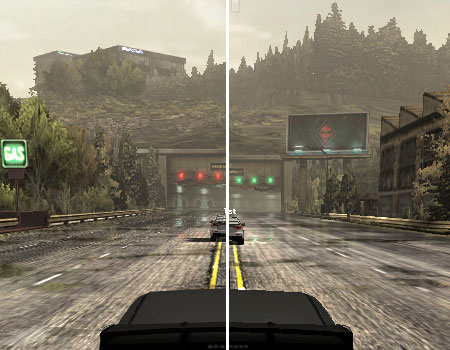 The two versions of the game seemed pretty well matched in this regard. The Android edition would boot at the same time as its iOS counterpart if it didn't perform a mandatory update check on every load.

It's also worth noting that if you switch back and forth between another app on iPad mini, you'll jump straight back into the game. On Android, however, you have to sit through an annoying EA logo every time.

To ensure a fair testing environment, we rebooted both tablets, and made sure no other non-essential apps were running.

Surprisingly, the Android version comes across as more sluggish than the iPad edition - despite the Nexus 7's power advantage. The game runs as smooth as butter on the iPad mini, while the Android tablet seems to run the game at a lower framerate.

It feels like the Android version kicks into a smoother framerate 'gear' when you're inside an enclosed environment like a tunnel, but goes choppy again when you go back outside. On iPad, the framerate is locked down like Fort Knox.

And then there's this.

We put the two games head-to-head, with the same car on the same track on the same race. Touch steering was set as the control method in both games. We then let them drive themselves forward until they inevitably hit a wall. 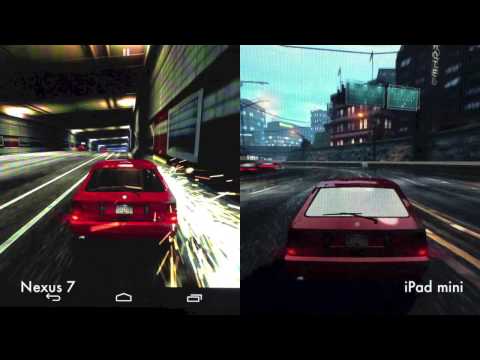 Despite starting at the exact same time, the iPad edition always ended up ahead of the Android version. It would slam into a concrete barrier at the end of the straightaway, then the Android edition would follow along seconds later.

I don't know if that's a framerate thing, or if the game just runs at a slower pace on Android, but it's the best example of the performance difference between the two test gadgets.

Does this performance hit affect the gameplay? It's hard to say. The iPad mini version feels a little smoother and more responsive, but that could just be the result of a better accelerometer component.

But, there does seem to be a little more pop-up on Android, and on tracks where you can see quite far into the distance the road becomes hazy and blurry. This can result in a few more prangs and last-minute swerves in the Android version.

Despite the Nexus 7's considerable technical advantage over the iPad mini, Need for Speed: Most Wanted is an altogether better game on the Apple device.

It looks nicer, it runs smoother, it loads faster, and it might just play a little better.

It's a fine game on Android, and if you never played the iPad version, you wouldn't feel let down by the game. But, put the two gadgets next to each other and it's pretty plain to see which is the winner.