The thing with dynamite is that it's volatile. It's simultaneously a blindingly effective tool and an unwieldy liability.

And this makes it an apt illustration of Ms. Splosion Man's conflicted nature.

On the one hand, it's an incredibly polished console platformer, with moments that are right up there with the best genre examples on the platform.

But it can also be treacherous, unreliable, and just plain frustrating to play.

Unlike other console properties that have successfully made the leap to iOS, like Joe Danger and Rayman Jungle Run, Ms. Splosion hasn't been rebuilt for the new format.

It sticks to the side-scrolling platformer formula of the Xbox 360 original. This means that you get a truly thrilling and incredibly slick 2.5D experience starring a hyperactive perma-combustible teenage girl. Thing.

You don't jump in Ms. Splosion Man - you explode, which hops you up into the air. You can detonate twice more before needing to make contact with another surface.

This ingenious mechanic also accounts for your offensive capabilities. Get in close to a meddlesome scientist or a killer robot and your detonation will cause serious damage.

Gameplay thus takes the form of flipping switches, wall-bouncing up structures, detonating explosive barrels for transit, and generally wreaking havoc on the scientific mega-corporation that held you captive.

There's loads of stuff to blow up in Ms. Splosion Man, which creates plenty of satisfying pyrotechnics.

The trouble is, these OTT effects, added to the detailed backgrounds and gaudy palette, means that Ms. Splosion Man herself can get lost in the action.

It's not such a problem when played on your TV, of course, but we occasionally struggled with this iOS version - even on our Retina display-equipped iPad.

This is especially problematic when combined with Ms. Splosion Man's other flaws. It was never the most precise of platformers even on its host platform, but certain sections here test the limits of the unavoidably fiddly virtual controls.

It's fine when you're rampaging through the standard levels, timing the presses of the explosion button to detonate barrels that propel you upwards and forwards. In fact, these sections play like one of the best endless-runners ever.

But when the pressure is placed on your other thumb - the one that's responsible for steering left and right - it can feel a bit of a mess. Sections that require you to jump between hovering platforms or make quick mid-air about-turns show up the control system's limitations.

This control issue is exacerbated further by some occasionally harsh checkpoint positioning.

Still, if you're a seasoned iOS platformer nut you'll want to persevere, because when Ms. Splosion Man is good, it's very good.

There are three generously sized worlds here, with each level offering a number of incentives to go back and try it again. There are several set goals to reach with every run-through, such as beating a rival ghost to the finish line or blowing up a certain number of objects.

There are also a bunch of power-ups to purchase which grant Ms. Splosion Man temporary ability-boosts, such as bigger explosions or faster running speed.

Slightly more contentious is the ability to pay to unlock levels. We don't particularly mind the option to skip ahead, but you might bridle at being steered towards several in-app purchases in order to simply progress through the game.

Still, the combined cost of unlocking all of the levels probably still amounts to less than the cost of the original console game, and at least you can earn some coins through play.

Ms. Splosion Man is a joyful riot of a platformer with excellent production values, plenty of levels, and some top-notch platform-puzzler sections. However, its somewhat unstable and awkward personality means you should approach with a little caution. 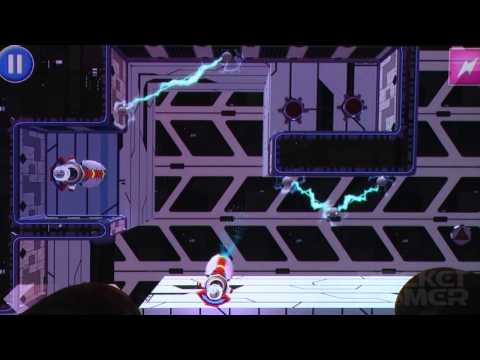 A rich and vibrant platformer with one or two control and balance issues that prevent it from joining the list of the best console conversions on iOS
Next Up :
Jade Order review - "An puzzling path of the warrior"

Explode your way through obstacles and enemies in Ms. Splosion Man for iOS

Volatile platformer Ms. Splosion Man will burst onto the App Store next week