In the first level of Monument Valley - the new iOS game from Whale Trail developer ustwo - you're presented with a twisting mess of floating architecture, and it seems like there's simply no path for your protagonist to take if she wants to get to the exit.

The start and finish points live on different floors, which are completely disconnected from one another. The only moving part - an L-shaped platform on a pivot point - doesn't look like it will help matters.

But then you shift that little platform around 90 degrees and the two floors magically snap together. They really shouldn't - it's an impossible connection that wouldn't work from any other angle - but from Monument Valley's lone, isometric view, the floors meet and our hero can wander between them freely.

Okay, so we've had games that are inspired by M.C. Escher, before, and we've already played games in which your perception of the world becomes the game's reality. From PSP puzzler Echochrome to indie favourite Fez to hidden gem Crush 3D, it's actually quite well-established.

But Monument Valley is constantly changing the rules, from level to level, in ingenious and totally unexpected ways.

Some stages have crows that wander around - sometimes getting in your way, other times helping you. In another stage you can walk up walls. Another gives you a Braid-like ability to mess with time, and in another yet you must use your Escher-like powers to redirect waterfalls.

ustwo designer Dan Gray is more interested in engineering a small handful of original and often surprising stages than in boring you with a hundred minor twists on a central theme. 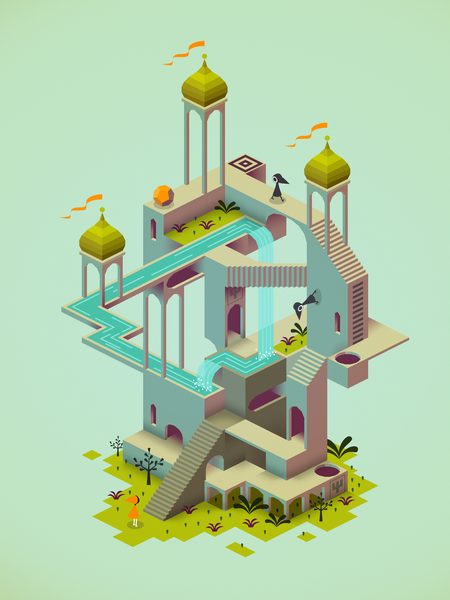 One particularly memorable level looks a bit like an ornamental music box, but the tiny architecture inside changes depending on which way you open the lid. And it shows something completely different inside if you simply rip the box apart at the seams.

This level in particular gives the game a playful, tactile feel that makes it ideal for tablets. But practically everything in game is controlled by toying with the world, messing with levers, and tugging on blocks lined with Lego-like studs. It wouldn't work on any other device.

Monument Valley has a quiet, contemplative atmosphere, which reminds me of evocative App Store adventures like Year Walk and Sword & Sworcery.

Plus, the game's understated narrative will also be delivered through the environment rather than cutscenes, and the studio is currently headhunting for an appropriate composer to complete the vibe.

ustwo is probably best known for whimsical endless-runner Whale Trail. But Monument Valley is the first game from an all new games-focused "hit squad" at the Shoreditch design studio.

The tiny four-man team has a raft of experience, with a collective rap sheet that includes Hackycat, Alice: Madness Returns, Wonderbook, Aftermath, Fable, and Joe Danger. That's quite a spread.

Monument Valley was easily my favourite mobile game at Eurogamer Expo, and is shaping up to be one of the next great puzzle adventures on mobile. It's coming to iPhone and iPad first, but it might end up on other devices down the road. Expect to see it in early 2014.