Monsu is a bit of a weird one.

It's a free to play card-based platformer. You can also combine a tornado with a llama and ride it.

Before we get too bonkers, let's bring it back to the land of the sensible as I tell you what Monsu is really all about.

Right then, Monsu has you playing as an angry monster who bashes his way through thieving villagers to get his cards back.

Half of the game is an action-packed sidescrolling platformer - you even collect coins. The other half involves battling against your enemies with cards. 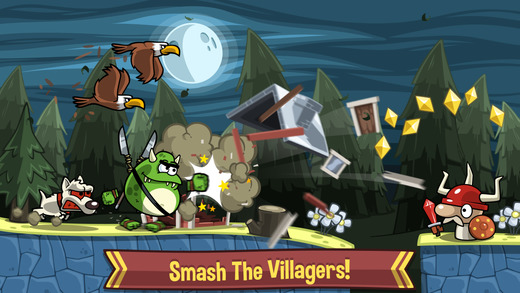 The more people you beat, the more and hopefully better cards you'll have. And, as said, you can combine cards to create new effects. That's the barmy part of the game.

Progression is endless in Monsu, so you can keep playing for as long as you like. You can even battle against friends.

You can download Monsu on the App Store for free right now. It should be coming to Android as well at some point.

Be the grisly ogre - chase the villagers to get your gems