E3 2013: Hands on with the fully reloaded Modern Combat 5

You have to hand it to Gameloft. It knows how to run its key franchises.

Contemporary military shooter franchise Modern Combat is now on an annual refresh; like Activision’s approach with Call of Duty it has multiple development teams.

That means this winter’s Modern Combat 5 started development prior to the release of its successor, which goes some ways to explaining its already high level of polish.

Still, despite that, at E3 2013, we are definitely playing a gamer-friendly demo.

There are three locations - all within Venice - but you would have had to be brain-dead to actually get killed. On that level, we were shooting fish in a barrel, at least getting some idea of how the developers are focusing their game.

Fire in the hold

First up, you have to engage with the sheer graphically fidelity. Brutally put, Modern Combat 5 looks amazing.

It has a very high level of environmental detail and your gun is big and gunny.

What’s more important, however, are the new features.

In the demo, you have an AI-controlled side-kick who will come and resurrect you if you take a bunch of damage. Neatly, when you are thus incapacitated you can only use your side-arm pistol to defend yourself.

You also have the option of throwing a robot drone into the environment, which will show enemies by highlighting their silhouette in red if they are shootable and orange if they are behind cover.

In the demo, there was also plenty of use of scripted elements such as a friendly gunship turning up to provide crucial covering fire, and an enemy gunship, which concluded the demo by frying your dumb ass. So much for enpowering the player.

Of course, there’s plenty of time to go before Modern Combat 5 is released.

We hope to get a more genuine feel of the final gameplay at Gamescom in August, but from what we can gauge at E3 2013, this is shaping up to be a killer. 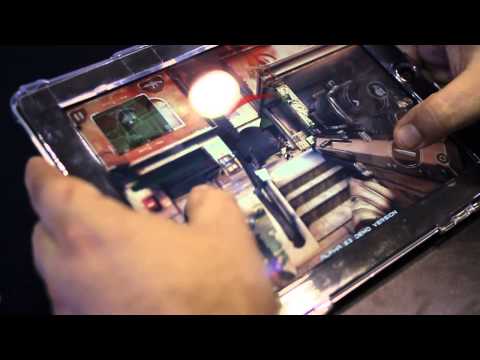 Subscribe to Pocket Gamer on
Next Up :
The benefits of accessible mobile games for the blind and visually impaired community