My pickaxe smashes into the rock in front of me, the bronze glittering in the dim light my head torch gives off.

At my feet there's a space iguana, stumbling around, minding its own business, half-trapped by my excavations.

The rock gives way and I walk forward, pocketing the chunks of ore that I've hacked out of the planet. On the other side there's a chamber, thick with the sort of darkness that makes me quake in my tricked-out, super speed mining boots.

Darkness in Mines of Mars usually means hidden horrors, or at the very least an enclave of scuttling beasts that want to turn my hardy prospector into a smear of gore spread across the screen.

Still, nothing ventured nothing gained. You're not just exploring the subterranean nooks and crannies, or finding the mysterious clues left by a previous civilisation - you're taming this wild land, shooting things in the face and clubbing out the natural resources for your own ends.

Those ends include rocket launchers, bigger bins to keep your stash of precious gems in, and new portals to unlock deeper secrets in the Martian dirt. 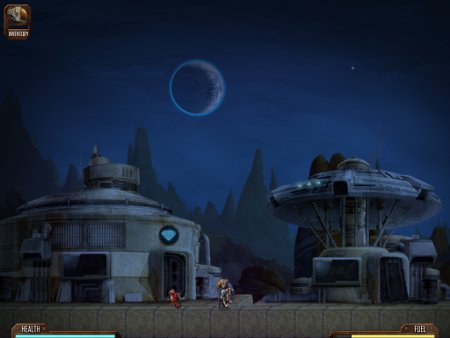 Do not shoot the robots. I can't stress this enough

For now, though, I'm focusing on a heat module that lets me go farther down into the cave system without suffering any ill effects. I slide a finger across the left side of the screen in the direction I want to head and my miner shuffles onwards.

The controls take a little getting used to. The left of the screen controls your movement and your pickaxe. Butt up against a hackable wall and you'll automatically start having a bash at it. You can chip away at the rocks above your feet too, but not the ones above your head.

The right side of the screen deals with your weapon. You can fire in a 360-degree arc, swivelling a finger around to aim. It's not the easiest of systems to get to grips with, but it does add an edge of panic whenever something that might harm you appears.

After all, you're not a seasoned soldier or a lunatic on a rampage. You're a miner.

That profession seems to add a sense of purpose to the sandbox gameplay. There's always a reason to leave the safety of the town you call home, where you can smelt the ores you find and turn the gems into raw materials for crafting, and delve back into the dark. 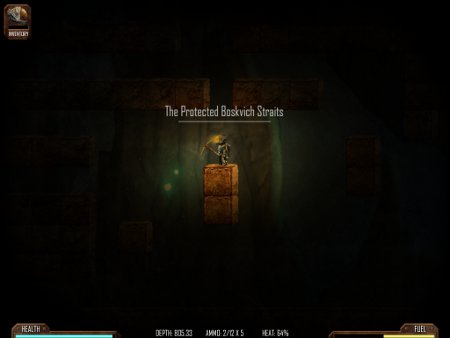 The larger chambers have ominous names

There's not as much freedom to be had here as you might find in other examples of the genre, but in a way that's quite comforting.

While there is a ridiculously large world to explore, it's never so daunting that you feel lost. You're a miner, after all, so go mine.

I push into the wide cavern, the dim light from my head torch barely lighting my way. I should upgrade that, I think to myself, just as a swarm of giant skittering bees sweep down and start to sting and bite chunks out of me.

My gun flashes, rounds cracking out automatically in the direction I'm pointing it in. I take a beating, but the creatures are dead, and they leave behind some extra fuel for my jetpack as well.

Other than your gun and your pickaxe, your jetpack is your best friend in Mines of Mars. If it runs out of fuel deep under the surface, then there's no way you're getting out.

You can refuel at the town, but it's another vulnerability in a long list of vulnerabilities you have to consider each time you head into the unknown. 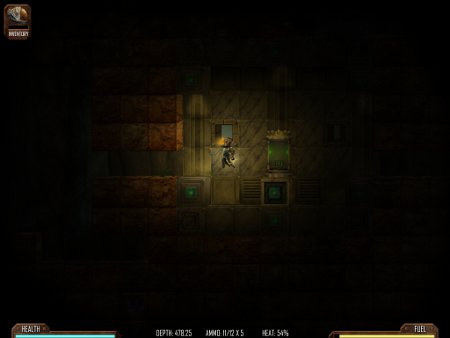 There's a great utility to Mines of Mars. You work underground to hack up enough exotic ore to make something that's going to mean the next time you go underground you're going to be able to stay a little longer.

That rhythm of exploration and creation is the bedrock of the game, and it can get a little repetitive sometimes. But the sheer amount of Mars you have to attack with a pickaxe means there's usually something new to pique your interest, or some dark mystery for you to fathom.

The mines of Mars are an intriguing place to visit, full of pits that writhe with energy, giant plants that can eat you in a single bite, and mysterious statues that somehow hum with ancient knowledge.

There's also a lot of stuff that needs mining down there. And you're a miner. So go mine.

Mines of Mars doesn't give you a lot to play with, but it gives you a really intriguing sandbox for you to do it in
Next Up :
DC Worlds Collide review - "DC fan service in an enjoyable gacha package"