Kid Tripp was equal parts homage and modern twist. It took retro platforming to twitchy new levels with its simple controls and pattern recognition. And I'm glad to report that Miles and Kilo is more of the same.

It adds some brilliant new ideas, and expands on that core double-tap gameplay in some really smart ways. Plus it's got a cheery aesthetic and it's really, really well written.

If you're looking for a new challenging platformer then you don't have to look any further than this. And it's got a dog in it. A dog that can do crazy rolls. Seriously, what's not to like?

The game sees you pelting through a series of super-tough levels. You tap on the left side of the screen to jump, and tap on the right to perform your special move.

Depending on what character you're playing that can be a special punch that fires out a green blob, a roll, or a slide.

You run automatically, so all you need to concentrate on is making it past the obstacles the game throws at you. And there are an awful lot of things that are going to get in your way. 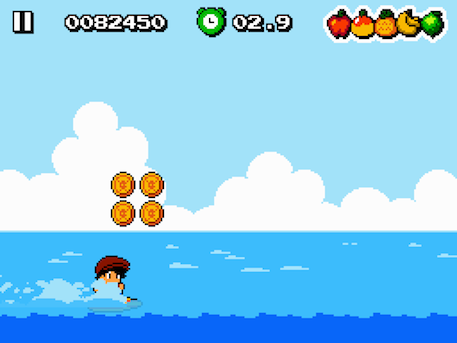 You're leaping over spikes, bottomless pits, and walls. You're dodging out of the way of butterflies, rocks thrown by monkeys, and angry biting fish. Every time you die you're dropped back at the start of the level.

But the levels play out the same in every run through. That means you're learning increasingly complex strings of move to try and get to the end.

Some of the harsh purity of Kid Tripp is missing here, thanks mainly to the expansion in the size of the challenges facing you. But the levels are so well designed you're not going to be too upset about that. 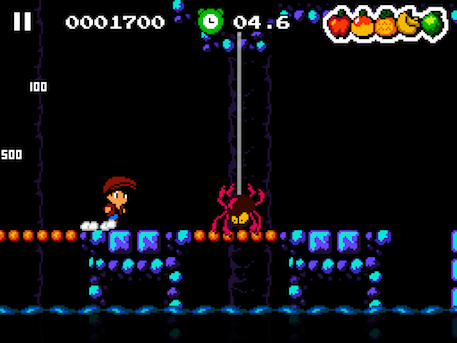 There's a lot more variety thrown into the mix here too. Sometimes you're riding along on a surfboard, sometimes you're a dog dragging your owner along. Things change, and it keeps the whole experience super fresh.

And the additions slot in brilliantly to the rest of the formula. The game feels like a sequel in the best possible way. It's built confidently on what came before.

Miles and miles of smiles

Miles and Kilo is a brilliant game through and through. It's clearly been put together with such love that it's almost impossible not to get wrapped up in it.

It's like a blanket. Albeit a blanket that sometimes punches you in the throat and cackles at your failures. And if that sounds like your sort of thing, you should get it downloaded right now.

A sharp and wonderfully well put together platformer that's well worth your time
Next Up :
Alien: Isolation review - "Chestbursting fun in the palm of your hand"